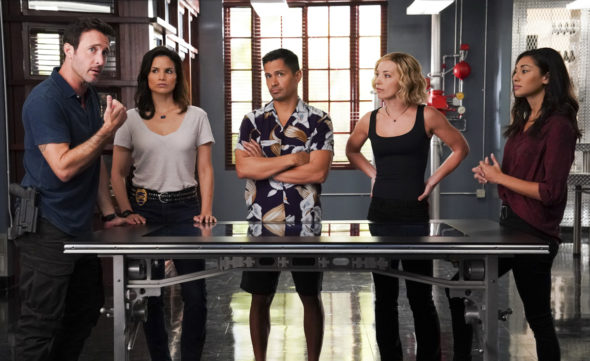 The big crossover for Hawaii Five-0 and Magnum PI is coming, and CBS is giving fans of both shows a look at the action and drama ahead when the two groups team up for a mission.

CBS released plot synopses and sneak peeks for the big event, which will air next week. Check out the plot descriptions below.

(“Ihea ‘oe i ka wa a ka ua e loku ana?” is Hawaiian for “Where were you when the rain was pouring?”)

MAGNUM P.I.: “Desperate Measures” – When Junior (Beulah Koale) is kidnapped as leverage to retrieve the stolen list of undercover CIA agents, and most of Five-0 is rounded up by the CIA to prevent them from interfering, Tani (Meaghan Rath) and Quinn (Katrina Law) ask Magnum and Higgins for their help, on MAGNUM P.I., Friday, Jan. 3 (9:00-10:00 PM, ET/PT) on the CBS Television Network.”

Check out the sneaks for the Hawaii Five-0 and Magnum PI crossover below.

What do you think? Are you excited to see these two shows join forces for a big night of television?

keep it going, its really good!

i would love to see hawaii 5.0 return and continue on with the cast members that remain but ill settle for a crossover to magnum ilove that show too

Please don’t cancel Magnum PI. I really like that show better than McGyver. It is more realistic. One of the better shows I like. Love seeing Hawaii again along with Hawaii 5 O. So, please renew this show. Love, love, love Magnum PI.

I really like Magnum PI but I’ve lost interest in Hawai’i Five-O. I live in Hawai ‘i, and the show Five-O might as well be based in Cleveland for the way it’s portrayed. At least Magnum actually incorporates Hawaiian actors, culture, and images in their show. Definitely keep Magnum. But Five-O I really don’t care.

I still don’t understand how Five-0 can team up with Magnum and co since it was established in Hawaii Five-0 that Magnum was a fictional character in a T.V. show?

BEEN WAITING FOR THE BIG HAWAII 5-O & MAGNUM PI CROSSOVER !!!!

These 2 shows are my favorite.I look forward to them every week and anytime I can rewatch them.

Love both shows and can’t wait to watch it

Yes but tired of Junior centric….what about Danny and Steve???

I so can’t wait love both shows

Really enjoy both shows especially the new Magnum P I. Story lines are great and the actors are awesome. Renew, renew, renew!