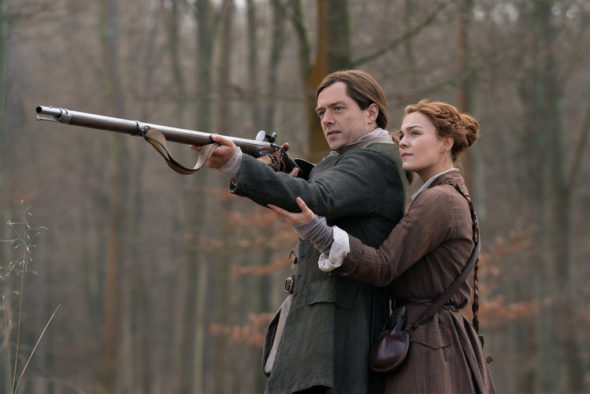 Outlander fans had a special treat on Christmas Day. Starz released the opening credits for season five. This is in addition to the sneak peek clip the cable network released for fans suffering through “Droughtlander” earlier this month.

Starz revealed more about the season ahead in a recent press release. Check that out below.

“Season Five of Outlander finds the Frasers fighting for their family and the home they have forged on Fraser’s Ridge. Jamie must find a way to defend all that he has created in America, and to protect those who look to him for leadership and protection – while hiding his personal relationship with Murtagh Fitzgibbons, the man whom Governor William Tryon has ordered him to hunt down and kill. With her family together at last, Claire Fraser must use her modern medical knowledge and foresight to prevent them from being ripped apart once again. However, while focusing on protecting others, she risks losing sight of what it means to protect herself. Meanwhile, Brianna Fraser and Roger MacKenzie have been reunited, but the spectre of Stephen Bonnet still haunts them. Roger strives to find his place – as well as Jamie’s respect – in this new and dangerous time. The Frasers must come together, navigating the many perils that they foresee – and those they can’t.”

Outlander will return on February 16. Check out the opening credits and sneak peek for the new season below.

I am so looking forward to Seasons 5 and 6…I have read all the books several times and anxiously waiting for Book 9..I would be so disappointed should the Series not continue. It differs from the books in places but is such an excellent series on its own…

I am so looking forward to the 5th Season of Outlander and definitely suffered from the “drought “. Love the story, love the characters!

Can’t wait to see season 5. I have watched every season more than once and I’m sure i will again.

Looking forward to season 5. Can’t wait. I have watched every episode more than once and will watch them all again before the new season starts.

Just picked up Starz to catch up and prep for S5!! We cannot wait!

Cannot wait!!!!
Need to read next volume and catch up before season five starts!!!