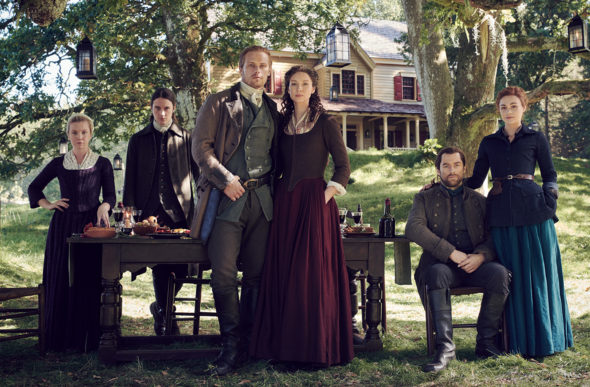 Is the end close at hand? Has the Outlander TV show been cancelled or renewed for a sixth season on Starz? The television vulture is watching all the latest cancellation and renewal news, so this page is the place to track the status of Outlander, season six. Bookmark it, or subscribe for the latest updates. Remember, the television vulture is watching your shows. Are you?

Airing on the Starz cable channel, Outlander stars Caitriona Balfe and Sam Heughan, with Duncan Lacroix, Sophie Skelton, Richard Rankin, David Berry, Ed Speleers, Maria Doyle Kennedy, Cesar Domboy, Lauren Lyle, Colin McFarlane, Kyle Rees, Tim Downie, Caitlin O’Ryan, Billy Boyd, Jon Tarcy, Michael Xavier, Paul Gorman, Alistair Findlay, Bronwyn James, Chris Larkin, Ned Dennehy, Anna Burnett, and Chris Donald. The story follows time-traveling 20th Century doctor Claire Fraser (Balfe) and her 18th Century Scots Highlander husband, Jamie Fraser (Heughan). In season five, the Frasers are fighting for their family and the home they have forged on Fraser’s Ridge. Jamie must find a way to defend all that he has created in America and to protect those who look to him for leadership and protection. With her family together, at last, Claire must use her modern medical knowledge and foresight to prevent them from being ripped apart once again.

The fifth season of Outlander averaged a 0.12 rating in the 18-49 demographic and 808,000 viewers. Compared to season four, that’s down by 29% in the demo and down by 22% in viewership. Find out how Outlander stacks up against other Starz TV shows.

We don’t have to wonder if Starz will cancel or renew Outlander for season six since it was renewed a couple of years ago. The bigger question at this point is: will season six be the end? I’ll update this page with breaking developments. Subscribe for free alerts on outlander cancellation or renewal news.

What do you think? Are you glad that the Outlander TV show has been renewed for a seventh season? How would you feel if Starz had cancelled this TV series, instead?

Caught up two years ago on Starz app been couple season 3. Been watching every episode never missed love it so good remains the lord of the rings movies.

I LOVE this show! Since I never read the books I have no comparison,just loving the story line. Please don’t end it. I also would like the series to go back to Netflix.

I think the show runners would do well to stick to the wonderful writing of the book’s author, Diana Gabaldon. They at times make what could be a great story into something trite like sex between Jaime and Claire. I’ve written to STARZ and Mrs. Gabaldon before warning them that they are on the same road as G.O.T on HBO bc they don’t trust the book fans! Instead they follow the formula of sex, nudity, and shun real drama like Brianna’s opposition to that cross burning or her dad, Frank, not liking her friendship with Claire’s black doctor friend’s family!… Read more »

The producers continue to put their own personal spins on the seasons and episodes, changing Diana’s brilliant books. As season 5 closes, once again, chapters have been lost and replaced. Important details for the viewer to gain deeper understanding and stay loyally connected to their beloved characters seem to be forever falling through time. I hope season 6 parallels the book more because the actors are incredible!

I hope Starz continues with the Outlander series till the end of the story.i love this show it is the only reason I subscribe to the Starz channel.

I hope that the writers read the story! They have made it all drama and cut out any cute funny moments. It’s missing something. Clair and Jamie are connected they have fun with in all the drama. The book is a success because it has more than one drama after another. So season five is all messed up! Stop changing the story. People like it the way it was written. They changed the gathering of the clans and kept characters alive when they should be dead! It is becoming kind of annoying. I hope that they stick to the storyline… Read more »

I love this show… so different than some of the junk on tv now!