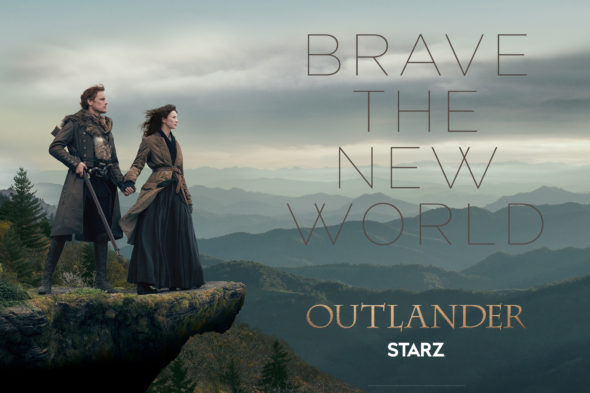 Last year the Outlander TV show on Starz saw a dramatic increase in the Nielsen ratings. Consequently, the network gave it an early renewal through both its fifth and sixth seasons. While we don’t have to worry whether Outlander will be cancelled or renewed for season five,, we’re left to wonder whether it can keep on growing, or if it has reached its peak. We’re keeping an eye on the ratings during the fourth season, so stay tuned.

Outlander, season season four, is based on the fourth novel in Diana Gabaldon’s Outlander book series, Drums of Autumn. It continues the story of time-traveling 20th Century doctor Claire Fraser and her 18th Century Scots Highlander husband Jamie Fraser, as they try to make a home in colonial America. Meanwhile, back in the 20th century, daughter Brianna Randall (Skelton) and historian Roger Wakefield (Rankin) search for historical proof that Claire and Jamie were able to reunite in the past.

For comparisons: The third season of Outlander averaged a 0.32 rating in the 18-49 demographic and 1.512 million viewers.

What do you think? Do you like the Outlander TV series? Was Starz right to renew this TV show for both season five and season six?

Really gone down hill since first season. And an entire show about a snake bite??? What a waste of time.

One of the best series I’ve seen in a long time. Can’t wait for the new season to start.

Yes! I do think Starz was right! Oulander is amazing. Can’t wait for the next season!

Absolutely, I’ve enjoyed the whole series. I’m now reading the series. What makes the series so good is the actors portraying the characters. Do your best to keep the storylines as clear as you can to the books. You keep all your friends and fans glued to the series. I’m rating a 5 or 10 whichever is used as the highest rate

I loved season 1, enjoyed season 2, began to lose interest halfway through season 3 and found season 4 boring. The writers appear to be more interested in providing their own story lines than in adapting the books to the screen. The episode featuring Frank and Laoghaire is a prime example; in my opinion it was rubbish and the last straw. I doubt I’ll watch season 5, and if the producers continue to invent their own plots I don’t believe the show will survive for season 6. This started out as the best show I’ve seen on TV and it… Read more »

Well I think that you are wrong. The show was amazing and can’t wait for season 5! I didnt read the books and I like how they change things from the books bc if they didnt then you would know everything that would happen and that would be boring.

You are, of course, entitled to your opinion. They lost a third of their viewers in season 4 and I am merely explaining why they have lost me.

So far so good. Haven’t seen the America’s series as yet.

I am a fan of the books, and I watched the first 3 seasons, but after Ms. Balfe and Mr. Heughan made political comments, I didn’t watch season 4. I believe that everyone is entitled to exercise freedom of speech, and everyone is entitled to an opinion, but there’re are consequences for doing so. I know many who stopped watching due to their dismay at these non-citizens getting involved in US politics.

Its s show! Not real life and that is why we watch them, for entertainment. To get away from real life. You sensitive need to leave your opinions behind!