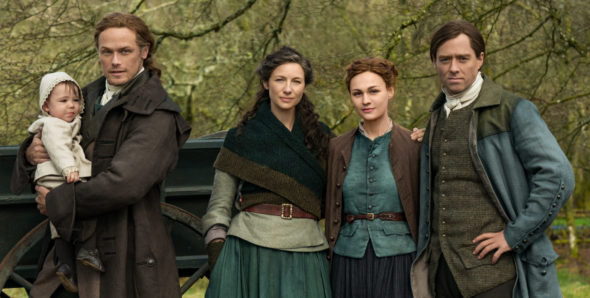 Are Claire and Jamie running out of time in the fifth season of the Outlander TV show on Starz? As we all know, the Nielsen ratings typically play a big role in determining whether a TV show like Outlander is cancelled or renewed for season six. Unfortunately, most of us do not live in Nielsen households. Because many viewers feel frustration when their viewing habits and opinions aren’t considered, we invite you to rate all of the fifth season episodes of Outlander here. Status Update Below.

A Starz historical time travel drama, Outlander stars Caitriona Balfe and Sam Heughan, with Duncan Lacroix, Sophie Skelton, Richard Rankin, David Berry, Ed Speleers, Maria Doyle Kennedy, Cesar Domboy, Lauren Lyle, Colin McFarlane, Kyle Rees, Tim Downie, Caitlin O’Ryan, Billy Boyd, Jon Tarcy, Michael Xavier, Paul Gorman, Alistair Findlay, Bronwyn James, Chris Larkin, Ned Dennehy, Anna Burnett, and Chris Donald. The story follows time-traveling 20th Century doctor Claire Fraser (Balfe) and her 18th Century Scots Highlander husband, Jamie Fraser (Heughan). In season five, the Frasers are fighting for their family and the home they have forged on Fraser’s Ridge. Jamie must find a way to defend all that he has created in America and to protect those who look to him for leadership and protection. With her family together, at last, Claire must use her modern medical knowledge and foresight to prevent them from being ripped apart once again.

What do you think? Which season five episodes of the Outlander TV series do you rate as wonderful, terrible, or somewhere between? Are you glad that Outlander has been renewed for a sixth season on Starz? Don’t forget to vote, and share your thoughts, below.

Cannot wait for season 6 how never any awards i will never know best show ever nothing comes close a family favorite all family join in rewatch now.

Best series ever! Top notch in every category. Outlander is a TV show in which I watch the episode’s over and over again! There will never be another like it.

Watched every episode Serious 5 loved every minute of all the rollercoaster episodes from start to finale could not fault any episode Only went by to quick we would love more after show talkshows like other shows have. some tasters during Lockdown Season 6 will be later how many would love little more updates Clanlands Men in Kilts and ALL Cast we love every episode from s1 right through love this show.

You will fall in love with season 5 Fiery Cross and all the seasons. The love story between Jamie and Claire and their family the adventures and all the history.