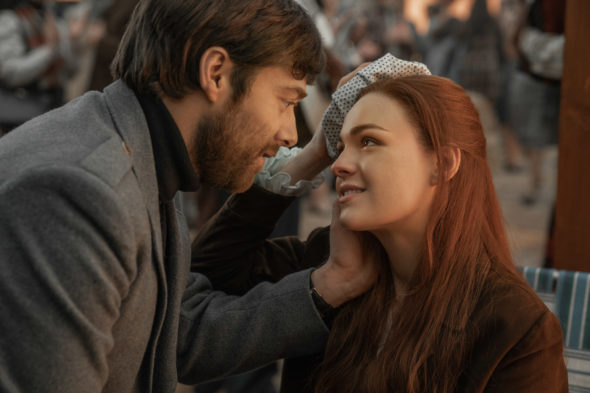 Have Jamie and Claire found their way back to each other? Is the Outlander TV show cancelled or renewed for a fifth season on Starz? The television vulture is watching all the latest cancellation and renewal news, so this page is the place to track the status of Outlander season five. Bookmark it, or subscribe for the latest updates. Remember, the television vulture is watching your shows. Are you?

Outlander, season four, is based on the fourth novel in Diana Gabaldon’s Outlander book series, Drums of Autumn. It continues the story of time-traveling 20th Century doctor Claire Fraser and her 18th Century Scots Highlander husband Jamie Fraser, as they try to make a home in colonial America. Meanwhile, back in the 20th century, daughter Brianna Randall (Skelton) and historian Roger Wakefield (Rankin) search for historical proof that Claire and Jamie were able to reunite in the past.

The fourth season of Outlander averaged a 0.17 rating in the 18-49 demographic and 1.04 million viewers. Compared to season three, that’s down by 47% and 31%, respectively. Learn how Outlander stacks up against other Starz TV shows.

Fans don’t have to worry if Outlander will be cancelled or renewed for season four. Starz already picked it up through the sixth season but the ratings are way down this year. Since even renewals can be cancelled, I’ll keep an eye out and will update this page with any developments. Subscribe for free alerts Outlander cancellation or renewal news.

What do you think? Did you think the Outlander TV show would be renewed through its fifth and sixth seasons? How much longer do you think this Starz TV series should run?

Outlander is the only reason I subscribe to Starz. The actresses and actors are great and the writing is good too!! I hope and pray that Starz will renew Outlander for seasons 7 and 8 !!! I will pay extra for Starz if they renewed it!!! I love Outlander!!! Renew 0Outlander!!!!!!!

I love this series. I literally am paying to watch season 4 (and hopefully 5) on Starz! I really hope it continues. It’s the only series of its kind with never ending adventure and epic love. <3<3<3

I have watched Outlander since beginning I love it please don’t cancel this wonderful series. There are so few good tv shows any more I hate reality tv please keep this great show.

Please renew I am just one person of four families who watch this series!

My favorite show and the only reason I have STARZ.
Read the books and for the most part, like how they’ve handled the screen plays. Please keep on renewing!!!

Love love love love… this show! The actors are some of the best I’ve seen and the story line within each season is intriguing! I hope it stays on-air for a long long time!

Love Outlander, it is the only reason I have Starz.❤❤

I am completely obsessed with this series. They have done an excellent job of bringing the books to life. I sincerely hope they will continue through the entire series of books! I am a lifelong fan for sure!

I do hope the series continues. I think it is excellent acting and I am completely obsessed! Looking forward to season 5-6!!!

If Outlander is cancelled it will be due to sloppy writing and straying to far from the original story and the incredible writing of Diana Gabaldon. This could have been an incredibly successful series if the writing staff had remained closer to the written word rather than attempting to push a modern agenda into an historic storyline. Those fans still watching are doing so in hope of a turn around comparable to season 1.

Jaime was so sexy with his tousled red hair. I hate his little girl looking bangs. I wish they would put his hair in a more manly (and sexy) style

Please keep Outlander on. It is my favorite TV show (and books). It is the only reason subscribe to STARZ.
i