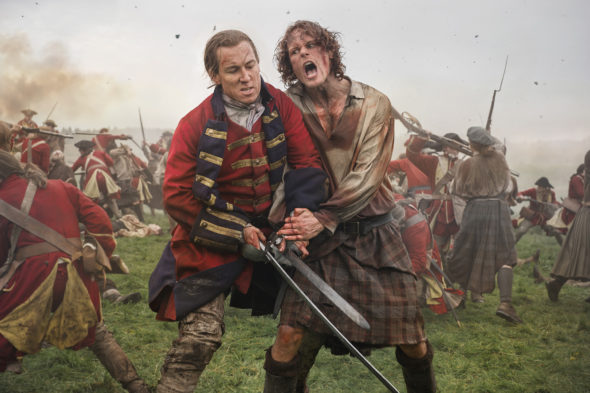 What’s next for Outlander? Starz chief Chris Albrecht recently weighed in on the future of the TV series, Deadline reports.

“I wouldn’t worry. … There are ten books and the show’s going amazingly. I think our biggest problem will be making sure that we don’t kill Caitriona and Sam along the way, they are working so hard, especially Caitriona, she’s amazing. The two of them are fantastic and so deserving of the accolades that they’ve gotten. We have joined legion of fans for Outlander around the world and our partners at Sony and we are having very productive discussions around the future of the show.”

Starz has already renewed Outlander for a fourth season, which will premiere sometime later this year.

What do you think? Do you watch Outlander? How many more seasons do you want?

I ‘d like it to go all the way through season 10, and I pray we’ll hear a renewal for seasons 7 and 8 soon! We are in for an especially long Droughtlander!

Since I have read all the books and watched every show, so far, I want it to go on as long as the books do—-PLEASE !

I love the Outlander and hope for further seasons. The cast is wonderful and I love the scenery. Please bring it back soon.

The Outlander Series is amazing! The writers and creators have done an amazing job bringing these phenomenal books to life! This show is why I subscribe to Starz, and would be sorely missed. Please don’t cancel this fantastic show!