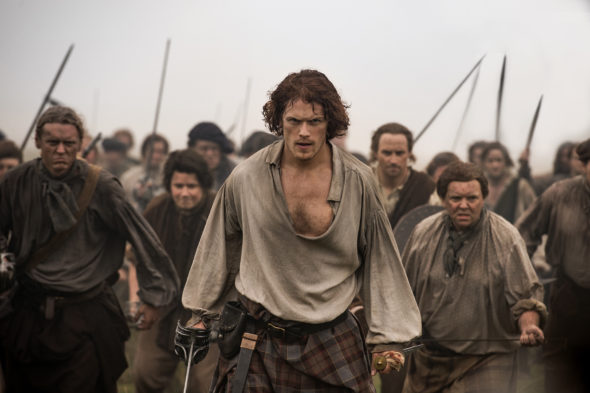 Will Outlander have another season? Entertainment Weekly reports there are ongoing talks to renew the Starz TV show for a fifth season.

On EW Radio, Sony TV’s Chris Parnell revealed they are currently discussing an early season five renewal for Outlander. The Starz series has already been greenlit for a fourth season, which is slated to debut in 2018.

“In order to keep this show year by year and not have a Droughtlander, we had better start hustling on season 5 right now. I can tell you there are early talks on us doing that, to absolutely not have an extended Droughtlander like we’ve had before. That’s the goal.

I’ll tell you that I’m in this to tell Diana’s story to completion. We want to deliver Outlander all the way through, just like Diana wants to deliver it all the way through. Where she leads it, we want to bring it there. I believe in my heart that our friends at Starz want to do the same thing. The worst thing that can happen is if we ended this prematurely.”

What do you think? Do you watch Outlander? Do you want a fifth season?

Please renew for all of the books written Diana Gabaldom regarding the series Outlander. Yes it would make a lot of people unhappy to end this journey prematurely but the reason to NOT end this story until the last word is spoken is its a far Superior series than anything else on TV.

BRING IT ON ! GO OUTLANDER.

Please follow the story to the end. I guess the question is will the actors/actresses get money hungry and want more and more until it’s not possible .

Why start something your NOT going to END ?
This is by far the best drama on any channel.
Please do NOT leave s hanging

They must see it thru to the end…amazing show nothing else compares to it please don’t cut it short…..