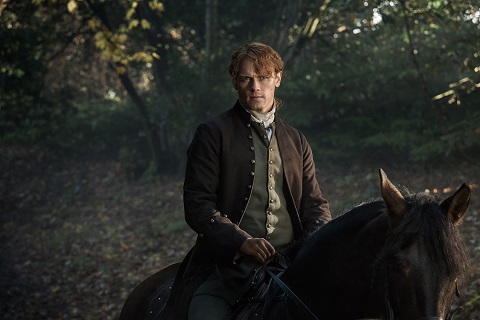 Outlander is gearing up for a new adventure. Starz just announced production has begun on the TV show’s fifth season.

The new season of the historical drama “sees a continuation of the Fraser family’s adventures, as they navigate the trials and tribulations of life in colonial America. Establishing a home in the New World is by no means an easy task – and protecting it proves even more difficult – particularly in the wild backcountry of North Carolina, during a period of dramatic socio-political upheaval.” The cast includes  Caitriona Balfe, Sam Heughan, Sophie Skelton, Richard Rankin, David Berry, John Bell, and Ed Speleers.

Starz has not yet announced a premiere date for season five of Outlander, but you can read more info below: 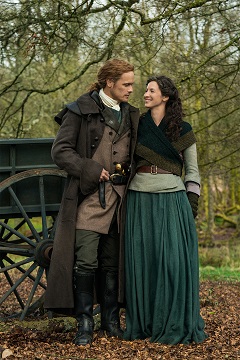 Santa Monica Calif., April 16, 2019 – Starz, a Lionsgate company (NYSE: LGF.A, LGF.B), in association with Sony Pictures Television, has announced that the fifth season of the Golden Globe(R) nominated hit series “Outlander” has begun production in Scotland. Season Five will play out over 12 episodes, based on material from The Fiery Cross, the fifth of eight books in Diana Gabaldon’s international best-selling Outlander series.

Matthew B. Roberts, Executive Producer, commented: “In Season Four, Jamie and Claire’s decision to remain in the New World changes the course of their life together. After being struck by the beauty of the North Carolina wilderness – untamed and uncultivated – they choose to call it home: Fraser’s Ridge. However, what is a ‘dream’ for some is a ‘nightmare’ for others. Being at the center of the birth of America is often a bloody and violent and heartbreaking matter. Now, in Season Five, Jamie and Claire’s duty is not only to their loved ones, but to the community of settlers forming part of the ever-increasing Clan Fraser.”

The Frasers of the Ridge are here! The fifth season of “Outlander” sees a continuation of the Fraser family’s adventures, as they navigate the trials and tribulations of life in colonial America. Establishing a home in the New World is by no means an easy task – and protecting it proves even more difficult – particularly in the wild backcountry of North Carolina, during a period of dramatic socio-political upheaval. As Claire knows all too well, friends, neighbors and countrymen are unwittingly marching towards Revolution, with members of the elite ruling classes struggling to stifle the alarming undercurrent of unrest triggered by the Regulator Movement. Against this backdrop, which soon heralds the birth of the new American nation, Claire and Jamie are forced to ask themselves just how far they are willing to go to protect their home, and praying there will be no reason to light the “fiery cross,” an ancient Scottish call to arms.

The “Outlander” television series, executive produced by Ronald D. Moore, Maril Davis, Matthew B. Roberts, Toni Graphia, and Andy Harries, is inspired by Diana Gabaldon’s eight-book Outlander series that has sold an estimated 30 million copies worldwide with all the books having graced the New York Times best-sellers list. The “Outlander” television series has become a worldwide success with audiences, spanning the genres of history, science fiction, romance and adventure in one amazing tale.

What do you think? Are you a fan of Outlander? Are you looking forward to the new season?

I ran across Outlander two or three months ago on Netflix, not actually watching it until last week because I knew nothing of what it was about and fell in love with the series. I have always been fascinated with time travel books and movies, such an intriguing subject and these perfectly wonderful believable caricatures drew me in so quickly I knew I had to have the streaming App to continue being able watch this series. I’m almost done with the fourth season, truly looking forward to both five and six that it’s been renewed for. My daughter bought me… Read more »

Yes, I’m a fan and look forward to Season 5. Hope Sam gets his recognition when the Golden Globe Awards are announced. His acting is superior. Will watch and wait !!!

Thank you STARZ for renewing Outlander, the best show on TV. It’s too long between seasons though. It’s too exciting to wait over a year for its return. Hope to see it soon. My favorite person on the show is Jamie Fraser with his great acting, accent and handsomeness makes the show worth watching by himself.
Please hurry the return and don’t take so long between seasons.

I have been a fan of Outlander form the first episode of season 1, have shared it with over 10 people and they are just as hooked as my family and I are. I have the whole first season on DVD and I’m looking forward to purchasing the other three and then the next future seasons. Thank you STARZ for this fantastic top quality film you have brought to our viewing pleasure. We truly are looking forward to season 5 and hopefully many more seasons. you diffidently have a show that can run as long as LAW AND ORDER OR… Read more »

So excited that they are coming back. Thank you Starz for continuing this amazing story.

It is a privilege to watch Outlander. The attention to detail is beyond anything I have seen over many years. The two leads act with extraordinary sensitivity with excellent support from all others- characterisation is superb. All aspects of this series ring with an authenticity rarely seen and I hope so much that it will be possible to complete the entire s story . Outlander is on a level above.

It is a privilege to watch Outlander. The attention to detail is beyond anything I have seen over a greatm many years and brings with it such sensitive performances from the two leads and exceptional support from all others, an authenticity that is a credit to all concerned . I have never been so drawn to a series , and very much hope that it will be possible to complete this story.

So do love this show n it’s characters. My daughter n I. Watch it together. Thanks for renewing it. Can’t wait

Love Outlander, great show. But please don’t have one of them kidnapped any more. This storyline is getting tiresome

OMG! I can’t wait, Outlander is my favorite show on TV. I just love the characters well, most of them. I’m really gonna be sad when Outlander isn’t on anymore.
That will be the worst day of my life.

Being a dyed-in-the-wool fan of the books for over 20 years, I am also a great fan of the TV series. Sam Heughan and Caitriona Balfe make the characters come to life. Awards are scarce. The TV show deserves more in the way of recognition for the actors and for the productional crews as well.

Outlander is the best series we will ever see. Scenery, set design,costumes,and of course the brilliant casting, makes this exceptional series ,one that can’t be missed. I’m a TV junkie and have never experienced an obsession in a TV show,like this one. Looking forward to S5 , 6 and beyond.

I also have been obsessed by Outlander since finding it on Netflixa few days ago. I binged on both seasons and then subscribed to Starz just to watch the rest. Spent all day yesterday watching season 3 and plan to watch season 4 today. (Fortunately for me, I’m not tied to a day job anymore.) I’ve never binge-watched anything for solid days at a time. To this point, I like the first and second series the most. I prefer seeing Jamie in his kilt. Enough writing, must get back to Jamie and Claire.