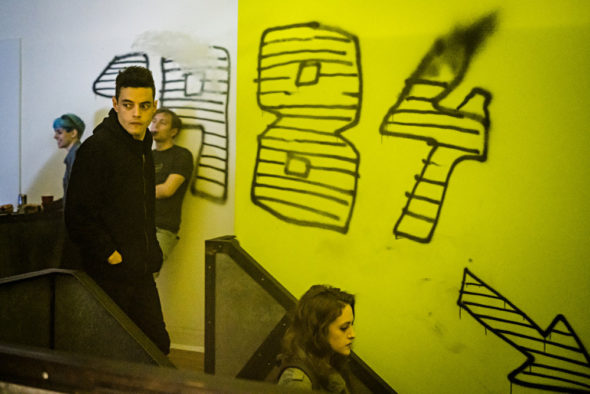 What fate awaits Elliot and Mr. Robot? Has the Mr. Robot TV show been cancelled or renewed for a fourth season on USA Network? The television vulture is watching all the latest cancellation and renewal news, so this page is the place to track the status of Mr. Robot, season four. Bookmark it, or subscribe for the latest updates. Remember, the television vulture is watching your shows. Are you?

The third season of Mr. Robot averaged a 0.22 rating in the 18-49 demographic and 529,000 viewers. Compared to season two, that’s down by 28% in the demo and down by 29% in viewership. Check out how Mr. Robot stacks up against other USA Network TV shows.

The third season premiere of Mr. Robot was way down in the ratings and the numbers have dropped lower. The series has drawn critical acclaim, as well as awards, for the basic cable channel. That’s a good sign and I suspect, even if the ratings drop lower, those factors will be enough to keep Mr. Robot on the air. The second season had 12 episodes and season three only has 10. Perhaps season four would have eight or fewer installments. I’ll keep an eye out for any signs. Subscribe for free updates on any Mr. Robot cancellation or renewal news.

8/29/18 update: Season four will be the final season for Mr. Robot. Details here.

What do you think? Do you hope the Mr. Robot TV show will be renewed for a fourth season? How would you feel if USA Network cancelled this TV series, instead?

Sam Esmail should stop directing all the episodes. The show has become way to internal and esoteric. Season 1 was well balanced.

After the “big reveal” of the excellent season 1, this show has been a horrific dumpster fire. There’s no mystery as to why nobody watches it anymore. It’s hardly even promoted. This was a one-season show.

Excellent show-no mindless content here- do not cancel, looking forward to another season, Do not base any show decisions off of ratings.., the ratings only sample a small segment of population who mostly enjoy those weekly mindless stupid situation comedy type. Keep Mr Robot going

Bring him back for season 4. Great show!

The show should finish with live ratings above a 0,20. I will be shocked if it isn’t renewed.

season 2 really hurt them. season 3 has been nothing but fire.

I think maybe the Freddy Mercury biopic might buy us a season 4. albeit a short one.

With its current ratings, I would say season 4 is still up in the air.