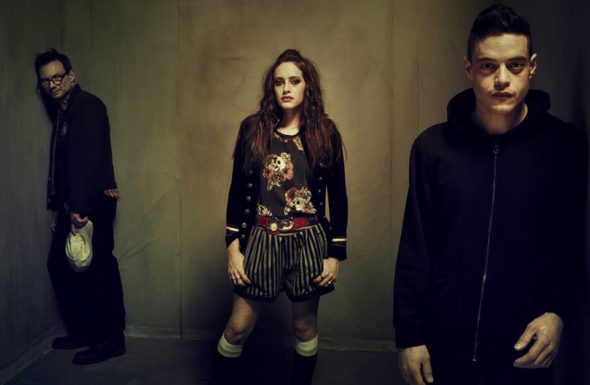 Is it time to shut down this program? Has the Mr. Robot TV show been cancelled or renewed for a fifth season on USA Network? The television vulture is watching all the latest cancellation and renewal news, so this page is the place to track the status of Mr. Robot, season five. Bookmark it, or subscribe for the latest updates. Remember, the television vulture is watching your shows. Are you?

Airing on the USA Network television channel, Mr. Robot stars Rami Malek, Christian Slater, Portia Doubleday, Carly Chaikin, Martin Wallström, Grace Gummer, Michael Cristofer, and BD Wong. The story centers on Elliot Alderson (Malek), a young hacker with social anxiety and depression. He’s recruited by an anarchist named “Mr. Robot” (Slater) to join a group of hacktivists called “fsociety”. Their goal is to destroy all records of debt by encrypting the financial data of the world’s largest conglomerate, E Corp. Season four begins with the pros and cons of Elliot hitting “send” on the email that could reverse 5/9.

The fourth season of Mr. Robot averaged a 0.12 rating in the 18-49 demographic and 376,000 viewers. Compared to season three, that’s down by 47% and 29%, respectively. Find out how Mr. Robot stacks up against other USA Network TV shows.

USA Network already announced that Mr. Robot won’t have a fifth season. Could an upswing in the ratings help make a case for some kind of continuation? It seems doubtful but you never know. I’ll keep an eye on the ratings and update this page with breaking developments. Subscribe for free alerts on Mr. Robot cancellation or renewal news.

What do you think? Are you sorry that the Mr. Robot TV show wasn’t renewed for a fifth season? Would you have watched season five or, is this a good place to end the show?

Why discontinue a show that feels so current in the world today? It’s like a time out from actual reality, where possibilities emerge to, well… anything!!! Mr robot season 5 if aired… let’s just say people would be dying to watch it!!! Bring it back friends. Please + thank you. #relevanceiskey #theresgottobemoretothestory

They finnished it perfectly but I still want some more though

This season 4 seems to end the adventure in his mind … well in our minds too … because … we are Elliott. Would love to see some more seasons tho … kinda addicted I must say.

I would watch this show forever. Season 5? 10? Some things left unanswered. Plenty of room to add. However, if it has to end, they did it right. I am Eliot.

I would watch this whole forever. Season 5? 10? Some things left unanswered. Plenty of room to add. However, if it has to end, the did it right. I am Eliot. Perfect.