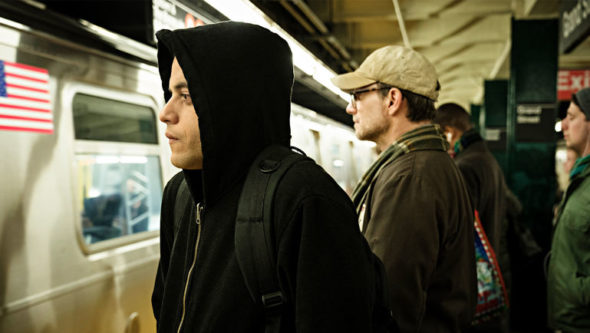 Will viewers get a satisfying ending in the fourth season of the Mr. Robot TV show on USA Network? As we all know, the Nielsen ratings typically play a big role in determining whether a TV show like Mr. Robot is cancelled or renewed for season five. (In this case, season four is the end of the series.) Unfortunately, most of us do not live in Nielsen households. Because many viewers feel frustration when their viewing habits and opinions aren’t considered, we invite you to rate all of the fourth season episodes of Mr. Robot here.

What do you think? Which season four episodes of the Mr. Robot TV series do you rate as wonderful, terrible, or somewhere between? Do you think that Mr. Robot on USA Network should have been renewed for a fifth season? Don’t forget to vote, and share your thoughts, below.

MR ROBOT IS INE OF THE BEST TV SHOWS EVER BUT YOU NEED TO LEGIT PAY ATTENTION BUT …..SPOILERS HUSY IN CASE SPOILERS*** the ending of season 3 was crazy I felt bad for darm and what shes doing now falling apart Angela what a good scene her death was epic an sad Darlene always fascinated me just her swag isgaf attitude but this season she needs elliot more than elliot needs her and what’s she doing with the drug dealer and now mr robot elliot and…. also seeing price deal bad Tyrell doing good and being owning the villain… Read more »