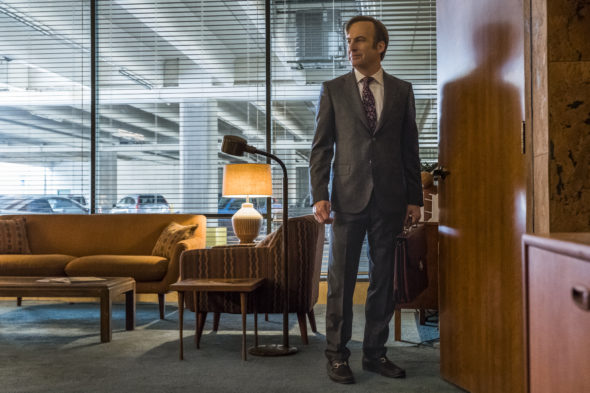 Is Jimmy McGill’s transformation into Saul Goodman complete? Has the Better Call Saul TV show been cancelled or renewed for a fifth season on AMC? The television vulture is watching all the latest cancellation and renewal news, so this page is the place to track the status of Better Call Saul, season five. Bookmark it, or subscribe for the latest updates. Remember, the television vulture is watching your shows. Are you?

The fourth season of Better Call Saul averaged a 0.44 rating in the 18-49 demographic and 1.49 million viewers. Compared to season three, that’s down by 25% in the demo and down by 10% in viewers. Learn how Better Call Saul stacks up against other AMC TV shows.

Since AMC issued an early season five renewal ahead of the Better Call Saul season four debut, you don’t have to spend this season wondering whether it will be cancelled or renewed. Now, the question is whether the fifth season will be the final installment. I’ll keep a hungry eye on the ratings and press releases, and update this page with breaking developments. Subscribe for free Better Call Saul cancellation or renewal alerts.

What do you think? Should AMC renew the Better Call Saul TV show past season five? What seems like the right time to end this AMC TV series?

This is one of the best shows on TV! I hope there will be a season 5. Maybe one of the reasons the ratings on this show are low is because it is such a great binge show. I typically wait until the end of the season and watch the whole season in a few days.

Yes! I love Jimmy and Kim!