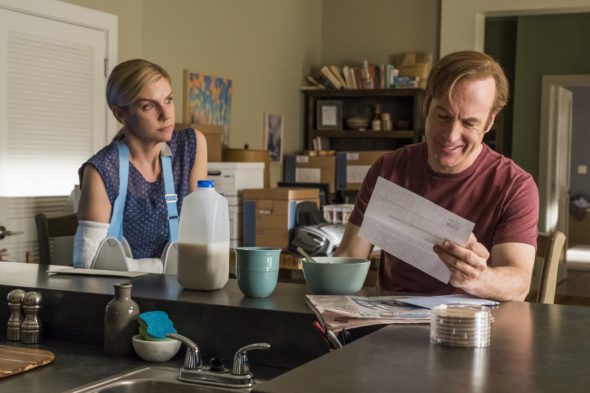 Is life breaking good for Saul Goodman? AMC has renewed its Better Call Saul TV show for a fifth season. The cable network announced the news at this weekend’s TCA Summer Press Tour. The early renewal comes a little more than a week ahead of the Better Call Saul season four premiere, on Monday, August 6, 2018 at 9:00pm ET/PT. Check out the (only slightly risqué) announcement photo, below.


What's the best way to remind critics that your show is returning for S4 on Aug. 6 while also announcing a S5 renewal? If you're @mrbobodenkirk, it's by whipping out the temporary tattoo you've placed "over your crack." #BetterCallSaul #TCA18 @amc_tv (Frederick M. Brown/Getty) pic.twitter.com/CHhc17vlyW

What do you think? Are you a fan of the Better Call Saul TV series? Do you plan to tune in for seasons four and five on AMC? Let us know, below.

The show is well done and enjoyable, but comtent has been lacking. Not much happens anymore……it seems there’s just not enough new material to keep it interesting. I feel that it should have wrapped up in three or 4 seasons.
Also, there’s way toouch time between seasons to keep interest level high.

Yes, I think it is a very good show. I would like to see it continue even after it meets up with the breaking bad sending. It could still continue with more stories.