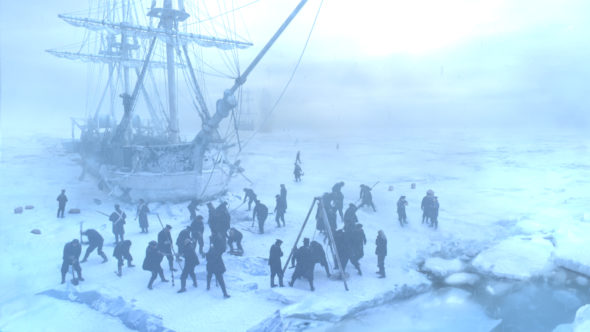 TV show description:
Based on the Dan Simmons novel of the same name, and inspired by a true story, The Terror TV show is al fantasy drama anthology. The first season centers on the Royal Navy’s perilous voyage into unchartered territory, as the crew attempts to discover the Northwest Passage. Despite heightened fears, fading hopes, and scarce supplies, they forge on toward the ends of the earth.

As skipper of the HMS Terror and the expedition’s second in command, Captain Francis Crozier (Harris) is a first-class sailor, but because he is Irish, he is unlikely to rise any higher in Her Majesty’s Royal Navy. Setting aside any feelings he might have about his second-class treatment, Crozier rises to the occasion when calamity arises.

Captain James Fitzjames (Menzies) is second in command of the Erebus and third command of the expedition. Despite his inexperience in the polar regions, with his star on the rise, Fitzjames has earned the trust of his captain, Sir John Franklin (Hinds), who commands the expedition. Fitzjames and Crozier are ill-at-ease with one another, and the tension between them grows as their circumstances become more dire.

An experienced leader with a spotty record, Captain Franklin is more well-liked than respected. He lost crew members on an earlier polar expedition. Now, he is trying to find a way to go out on a wave of glory, by discovering the Northwest Passage. “Pride goeth before a fall,” ought to be his watch-words.

Of the four physicians on the voyage, Dr. Harry Goodsir (Ready) is the most junior. Upright, kind, and open-minded, he enlisted with the Discovery Service to explore the wonders of the Artic. He’s the first one aboard to realize something supernatural is at work.

The daughter of a Netsilik shaman, “Lady Silence” (Nielsen) is concerned that the two European ships and their crews will destabilize her homeland’s natural balance. Soon though, she realizes she has to find a way to protect her people, as well as those on the expedition who have earned her friendship. It may be up to her to stop the supernatural catastrophe which threatens them all.

Through the course of this ordeal, The Terror explores everything that can go wrong, when desperate men struggle with their environment and one another.

What do you think? Do you like The Terror TV series? Should this AMC TV show be cancelled or renewed for another season?

please keep it on great show

I wasn’t sure if The Terror was canceled. I would like for it to continue

Bring it on! A great show based on reality