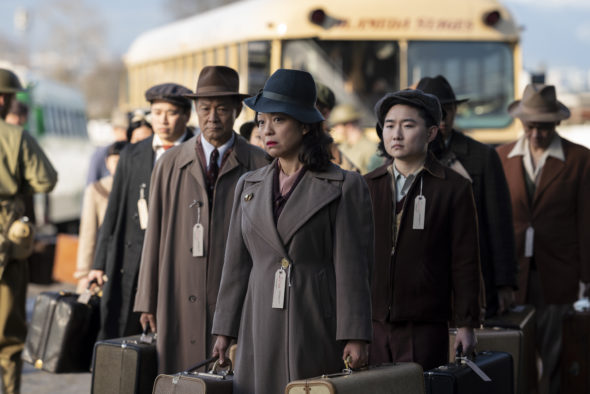 The second season of The Terror averaged a 0.08 rating in the 18-49 demographic and 393,000 viewers. Compared to season one, that’s down by 77% and 68%, respectively. Learn how The Terror stacks up against other AMC TV shows.

Will AMC cancel or renew The Terror for season three? The first season was one of AMC’s highest-rated series but season two performed terribly. Because it’s an anthology, that may not sink this series though. I still think The Terror will be renewed. I’ll update this page with breaking developments. Subscribe for free alerts on The Terror cancellation or renewal news.

What do you think? Should The Terror TV show be renewed for season three? How would you feel if AMC cancelled this TV series, instead?

Did this show get picked up by Amazon? “Them” it states that it is part of the terror series in lower caps. Just not cool

I’d truly love & whole heartedly hope that they come out with a season 3 and possibly even further more seasons in the future!!! Amazingly & truly talented Writing & directing Please bring it back. Especially for a season 3

Tired of good shows being cancelled!!! I’m anxiously waiting for another exciting season of The Terror. The writing and casts are all excellent.

With horror shows ending or being cancelled, ie. The Walking Dead, NOS4A2 and The Passage, I’m hoping with any luck that The Terror will continue with season 3 or I’m no longer going to have a decent horror series to watch.

I LOVED both seasons of The Terror. But with each 1, the missed the first episode, some times the second. So I was confused for a while. But once I caught up, the think, the Second Seasons edged out the First. But that’s My Opinion. We each have our own. I hope we do get a third and many more, after that.

Anxiously awaiting another season. Don’t cancel my favorite series. I can’t wait to see what story line awaits next!

I loved season 2. Don’t know why it did so badly. Love the whole show. Pls don’t let it die!

Yes, love to see a season 3

I enjoyed seasons one and two. I would like to see the third season.

The Terror season I was chilling and addictive. Season 2 wasn’t as addictive, but I still enjoyed it. The British actors in Season 1 were terrific.

We love watching The Terror. Please don’t cancel the series because we want more. The series is well written and filmed. Jim a I (Kat) very much enjoy looking forward to the next season surprises. Sincerely, Kat & Jim

Please renew The Terror for a Season 3