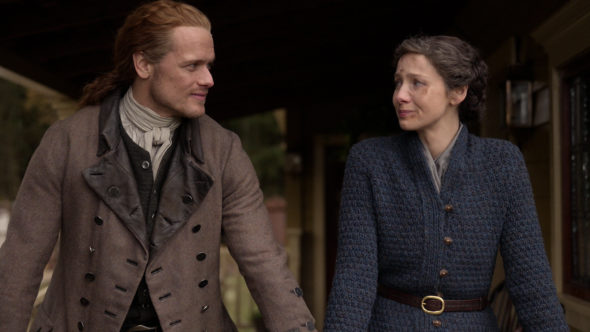 Starz continues to have faith in the Outlander TV series. The cable channel has a history of giving the historical fantasy drama early renewals and they’ve done it again. Outlander has been renewed for a seventh season ahead of the sixth season’s debut. There will be 12 episodes once again.

Outlander stars Caitriona Balfe and Sam Heughan, with Duncan Lacroix, Sophie Skelton, Richard Rankin, David Berry, Ed Speleers, Maria Doyle Kennedy, Cesar Domboy, Lauren Lyle, Colin McFarlane, Kyle Rees, Tim Downie, Caitlin O’Ryan, Billy Boyd, Jon Tarcy, Michael Xavier, Paul Gorman, Alistair Findlay, Bronwyn James, Chris Larkin, Ned Dennehy, Anna Burnett, and Chris Donald. The story follows time-traveling 20th Century doctor Claire Fraser (Balfe) and her 18th Century Scots Highlander husband, Jamie Fraser (Heughan). In season five, the Frasers fought for their family and the home they have forged on Fraser’s Ridge. Jamie had to find a way to defend all that he has created in America and to protect those who look to him for leadership and protection. With her family together, at last, Claire used her modern medical knowledge and foresight to prevent them from being ripped apart once again.

The cast, which has been filming the sixth season for more than a month, announced the season seven renewal via video (bottom, below). Season six is expected to debut later this year.

What do you think? Do you enjoy the Outlander TV series? Are you glad to hear that it has been renewed for a seventh season already? Will you be watching season six when it eventually debuts?

looking forward to season 6 of Outlander & im happy that we’re getting season 7. in the chaos of this pandemic, Im glad there’s still something constant. I read all the books & love the series, on a personal note, im happy that I shared the books & series with my mom before she passed in january 2017. she adored it!!

I binge watched the first 5 seasons and am now watching them all again. I cant get enough.

I can’t wait at the only show that I watch

I’m really excited that have renewed the show . I hope they will see it through to very end. Outlander truly is the best show out there.

Enjoy what is possibly the last show with real story-telling and minimal politically-motivated nonsense rammed down our throats while it lasts.

Awesome news I can’t wait next season this year. Look forward every episode love it enjoy it including books too stunning story.