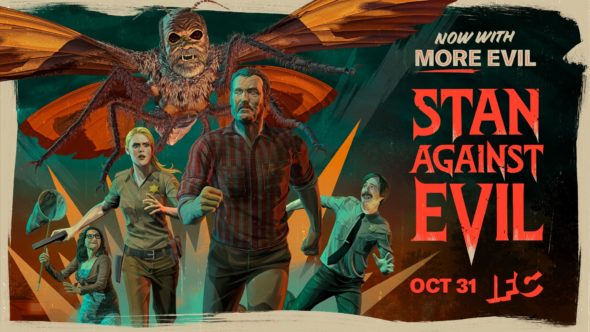 The ratings for IFC’s Stan Against Evil TV show have been darned microscopic. This small cable network (which is owned by the larger AMC Networks) seems more committed to producing programming it finds worthwhile than Nielsen ratings bait. After its third season, will this quirky TV series still fill the bill? Will Stan Against Evil be cancelled or renewed for season four? Stay tuned. *Status update below.

An IFC horror-comedy from creator Dana Gould, Stan Against Evil stars John C. McGinley, Janet Varney, Nate Mooney, and Deborah Baker Jr. Guest stars in season three include Scott Adsit, Maria Bamford, Matt Braunger, Christopher Mintz-Plasse, and Eddie Pepitone. Set in a seemingly quaint but haunted New Hampshire village, the story centers on disgruntled former sheriff Stan Miller (McGinley). This installment kicks off right after last season’s finale, when Stan traveled through time to save his dead wife, which opened a portal between the Land of the Living and the Land of the Dead. Now he and Evie (Varney) must deal with the evil forces taking over Willard’s Mill — which could involve making a deal with the devil.

For comparisons: The second season of Stan Against Evil on IFC averaged a 0.06 rating in the 18-49 year old viewer demographic and a total audience of 171,000 viewers.

What do you think? Do you like the Stan Against Evil TV series? Should this IFC TV show be cancelled or renewed for a fourth season?

*1/28/19 update: IFC has cancelled the Stan Against Evil TV show so there won’t be a fourth season.

Love this show, bring it back. So much fun

Love this show, bring it back!

I love stan . I want my show back on!

I love this show! Campy, funny and smart.

Definitely a 4th season. We love this show. Binged watched! Love the story lines, the characters, and the actors who play the rolls are perfect for those roles. I would be so devastated if this was cancelled

They need to definitely renew Stan Against Evil for a Season 4. Great Great show to watch! All the characters are awesome. The actors play such good roles.