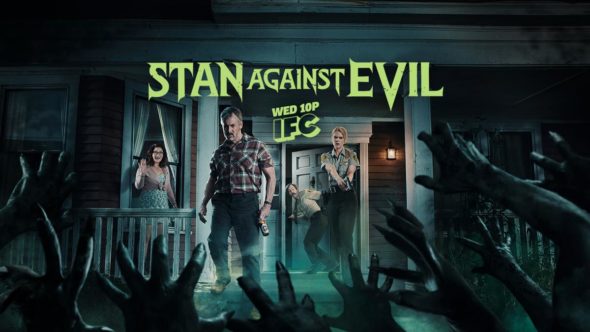 Despite minuscule ratings which would have seen it cancelled elsewhere, IFC renewed its Stan Against Evil TV show for a second season. The cable network is known for its quirky, cult programming, but at some point, even artists have to pay the rent. How long can this TV series survive with such low numbers? Will Stan Against Evil be cancelled or renewed for season three? Stay tuned.

An IFC horror-comedy from creator Dana Gould, Stan Against Evil stars John C. McGinley, Janet Varney, Nate Mooney, and Deborah Baker Jr. Guest stars in season two include Denise Boutte, Jeffrey Combs, David Koechner, Patty McCormack, and Steven Ogg. Set in the seemingly quaint but haunted small town of Willard’s Mill, New Hampshire, the story centers on disgruntled former sheriff Stan Miller (McGinley). In the second season, a reluctant Stan has to investigate the disappearance of his replacement, Sheriff Evie Barret (Varney), who — in the season one finale — found herself stranded in the year 1692, where she was convicted of witchcraft and sentenced to being burned at the stake. **Update below.

For comparisons: The first season of Stan Against Evil on IFC averaged a 0.07 rating in the 18-49 year old viewer demographic and a total audience of 186,000 viewers.

What do you think? Do you like the Stan Against Evil TV series? Should this IFC TV show be cancelled or renewed for season three?

** 1/13 update: IFC has renewed Stan Against Evil for a third season. Details here.

I love this show and I’m a “stupid” millennial. I hope they don’t cancel it!

Love the show me and my husband look forward to it every week. I am 55 please don’t cancel it.

love the show hope they don’t cancel it

Love this series! Agree with “The Master Shooter” on this one, why aren’t you polling the older crowd on this. This such a breath of fresh air compared to all the “Reality TV shows”
Keep going with this one!

Start polling the older crowd. 50-75. You might get higher ratings. Millennials haven’t a clue. And this older group watches more TV too.

Stan Against Evil isn’t quite there yet, and it’s early installments are still working out the finer points of its monster-of-the-week structure.

Very funny, goofy & interaining show.
Not getting the credit it deserves.
A must watch show!