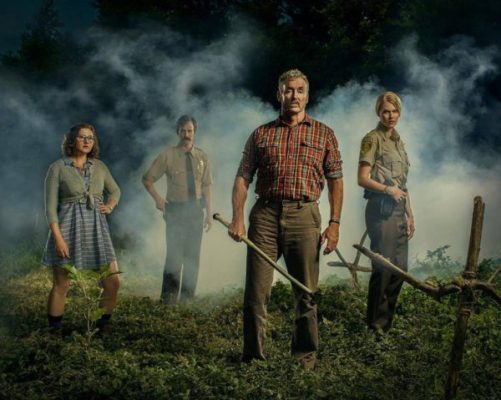 Has evil prevailed? According to ComicBook.com, IFC has cancelled Stan Against Evil after three seasons.

From Dana Gould, the comedy series centers on Stan Miller (John C. McGinley), a disgruntled former sheriff who has to fend off evil forces with his replacement, Evie (Janet Varney). The cast also includes Nate Mooney and Deborah Baker Jr.

On his podcast, creator Dana Gould announced IFC is not renewing Stan Against Evil for a fourth season. The decision doesn’t come as a huge surprise given the show’s low ratings.

I’m very proud of the show and its fantastic cast: John McGinley, Janet Varney, Nate Mooney, Deborah Baker Jr., our great directors, Eban Schletter our great music person, Autonomous F/X, all the people that worked on the show. I’m leaving a lot of people out. This isn’t the official format for my thank you, but I thought everybody did a great job. The show’s on Hulu, you can enjoy it. It ain’t comin’ back anytime soon, but that is, as they say, showbiz, and I’m already working on some other cool crap that will hopefully come your way.”

What do you think? Have you seen Stan Against Evil? Would you have watched fourth season?

Well, that sucks! I’ve been waiting for nothing. I really looked forward to it the last couple of years.