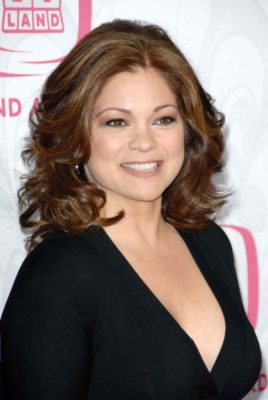 Food Network is all about the family. Recently, the network announced Valerie Bertinelli will host their upcoming TV show, Family Food Showdown.

The culinary competition series will pit two families “against each other in three rounds of challenges designed to test their cooking skills, recipes and family dynamics.”

New York – January 24, 2019 – Families that cook together stay together, and those that do it well have the chance to win $10,000 on new Food Network series Family Food Showdown. Valerie Bertinelli hosts as families face off in a fast-paced, action-packed culinary competition beginning on Sunday, March 3rd at 8pm ET/PT. In each episode, two families are pitted against each other in three rounds of challenges designed to test their cooking skills, recipes and family dynamics. The teams must blow away a rotating panel of culinary experts including Kardea Brown, Clinton Kelly, Antonia Lofaso, Daphne Oz, Jamika Pessoa, Christian Petroni, Courtney Rada, Jake and Jazz Smollet, Tori Spelling, Jet Tila, Isaac Toups, Bryan and Michael Voltaggio, Molly Yeh and more, to keep their family pride and take home the grand prize!

“Family Food Showdown has all the ingredients to captivate audiences with tension and unpredictable twists, mixed with family heritage and tradition, and even some comedic relief, as the families cook together on the clock in a high-stakes showdown,” said Courtney White, President, Food Network. “Host Valerie Bertinelli adds in her signature charisma and charm to this relatable family-centric culinary competition.”

The action unfolds as two families, comprised of three family members, endure three rounds of cooking challenges with surprising curveballs as they vie for advantages along the way. Throughout 13 hourlong episodes, the competing teams tackle challenges from Sunday suppers and delicious leftover dinners, to taco fiestas, and over-the-top breakfasts in their bid for the grand prize.

During the first round, the families must work together to create a dish that represents who they are as a family. As the competition progresses to round two, family recipes and dynamics are put to the test when Valerie announces that each family must eliminate one member of their own team. Strategy ups the ante in the last round of the contest, as each team must eliminate someone from the other team, putting the weight of the competition on the shoulders of one final family member for each. Only one family in each episode will earn $10,000 grand prize and keep their family pride.

Fans can get to know the families before every episode on Food Network’s app as they take on a series of digital-only challenges and can catch Valerie and the judges play a series of Beat the Heat games on Food Network’s Instagram Stories. Also viewers can go behind the scenes of the competition with insider photos and top video moments at FoodNetwork.com/FamilyFoodShowdown, and join the conversation anytime by using #FamilyFoodShowdown.”

What do you think? Are you a fan of Food Network? Will you check out Family Food Showdown?

It STOPPED? There are still 4 more episodes to air. Why did Family Food Showdown stop, and why would the network put a new show (delicate and not yet with roots) on at the same time as Voice or American Idol? Not smart on the network’s part :/

Yes, I’m a fan of Food Network. I look forward to seeing this family challenge. Love Valerie’s show. I’ve used many of her recipes. She is a good host.

I realize she was in comedy series but these a food shows and her jokes are not necessary or funny. She also acts like an never tasted any of her recipes before