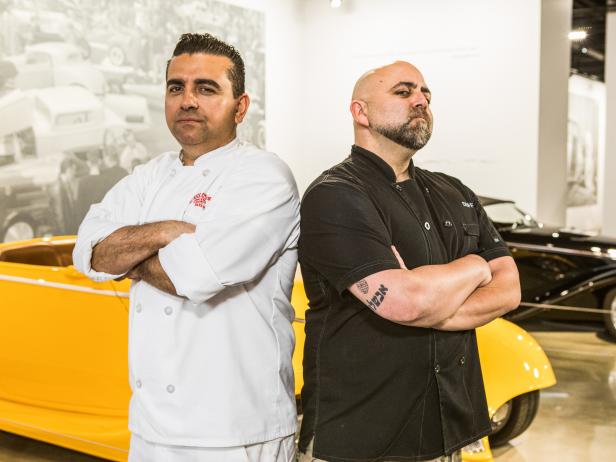 Get ready to see two bakers battle it out in another season of Buddy vs Duff. The series will return to Food Network next month, and there will be even bigger baking action!

Food Network revealed the following about the return of the series in a press release. Check that out below.

“The cakes are bigger, bolder, and the competition is even more fierce on this epic eight-week rematch of Buddy vs. Duff. Longtime rivals Buddy Valastro (Cake Boss) and Duff Goldman (Ace of Cakes) go head-to-head in round two of the most epic baking battle on Sunday, March 15th at 9pm ET/PT. Their wives, Lisa Valastro and Johnna Goldman, support them through the difficult challenges as every aspect of what it means to be a true cake artist will be tested. This season’s supersized cake creations will push the limit of imagination and ingenuity, as they are judged on a point system based on creativity, difficulty, adherence to the theme and the incorporation of a special challenging element, ranging from detail, special effects, interactivity, and more. The pressure is on as the two biggest names in cake vie to rise to the top to be crowned king!

“Buddy and Duff are both extremely passionate masters of their craft and extremely competitive. Their real-life rivalry adds a thrilling intensity to the competition, motivating them to step out of their comfort zones and experiment with things never done before with cake.” said Courtney White, President, Food Network.

From realistic prehistoric dinosaur cakes that look alive, to mini-golf cakes that are interactive, and to theme-park cakes that move, Duff’s and Buddy’s abilities will be tested as they build jaw-dropping cakes. The competition kicks-off in New York as the two bakers are challenged to whip up cakes highlighting their own interpretation of the Big Apple for an event hosted by actress and foodie Debi Mazar and New York news anchor and restaurateur Rosanna Scotto. While on the East Coast they make cakes of unseen proportions for the American Museum of Natural History, Medieval Times’ 30th Anniversary, and for Jordin Sparks, star of the hit Broadway musical Waitress.

On the West Coast, Duff and Buddy dive into a challenge at the Aquarium of the Pacific with astounding tableau underwater cakes. Then, it is a hole-in-one for one of the bakers as they make unique playable mini-golf cakes for LPGA pro Michelle Wie. Keeping the momentum going, the bakers are tasked to construct cakes that look and move like theme park rides for the 100th anniversary of Knott’s Berry Farm.

After weeks of intense competition, it all comes down to the epic finale on Sunday, May 3rd at 9pm ET/PT. As Buddy and Duff must combine all the special elements from all the previous challenges – interpretation, realism, special effects, detail, tableau, interactivity, and movement – into one last cake to celebrate Star Wars Day on May 4th for an event hosted by Billy Dee Williams at Star Wars: Galaxy’s Edge at Disneyland Park in California. These will be their biggest, most elaborate cakes yet. Expert judges Kimberly Bailey, Florian Bellanger, and Waylynn Lucas will determine which baker will rise to the top with the most out-of-this-world cake!

Don’t miss Buddy and Duff revisit round one of the competition with a special look back at their cakes and some of the most intense and unexpected moments of the first season on Buddy vs. Duff: Road to Rematch on Sunday, March 15th at 8pm.ET/PT.

Fans can get an exclusive extended look at Buddy’s and Duff’s over-the-top cake creations each week on the digital series Buddy vs. Duff: Extra Sweet, as well as meet the teams, get to know the judges, and see exclusive content with the special guests at FoodNetwork.com/BuddyvsDuff! Let us know which your favorite cakes using #BuddyvsDuff.”

What do you think? Are you a fan of this series? Will you watch Buddy and Duff battle it out in season two?

I’m a big fan of the show go Duff for second round!!