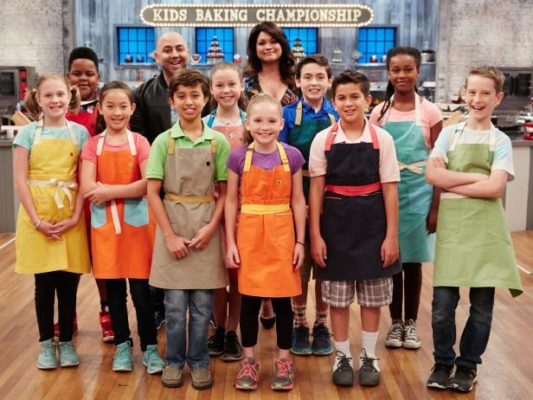 Kids Baking Championship will be back. This week, Food Network announced the TV show will return for a fifth season in August.

Hosted by Valerie Bertinelli and Duff Goldman, the cooking competition series put kids to the test as they bake their way through a number of challenges for a prize of $25,000.

New York – July 11, 2018 – School is out and kids are on summer break, but the talents of nine young bakers will be put to the test as they enter the Kids Baking Championship, beginning on Monday, August 6th at 9pm ET/PT. Valerie Bertinelli and Duff Goldman return on the new season to challenge the skills of the bakers, ranging in age from 10 to 13, in difficult dessert trials to see who will make it to the top tier of the competition. Only one will take the cake and the sweet grand prize of $25,000, a feature in Food Network Magazine, and the title of Kids Baking Champion!

Throughout the seven-week season, the kid contestants show off their skills and creativity as they whisk through new confectionary challenges, from gravity-defying cakes, to outrageous ice cream sandwiches using any sweet treat except cookies. The classic imposter dessert challenge returns as well with a new surprising Italian twist, and the bakers will also have to tackle other delectable desserts including creative cakes, bite-sized sweets and scrumptious snacks.

On the premiere, the bakers must serve selfieclairs, where they must use selfie photos as inspiration for creating a dozen eclairs from scratch, decorated to represent each bakers’ personality and style. Duff and Valerie throw the bakers a crazy curveball, and task them with decorating an additional éclair with a hashtag that best describes them, such as #ChocolateLover, #AthleticBaker, #BoysBakeToo, etc. On Monday, September 17th at 9pm ET/PT, the championship concludes as one talented baker will rise to the top in the grand finale.

What do you think? Have you seen Kids Baking Championship? Will you watch season five?