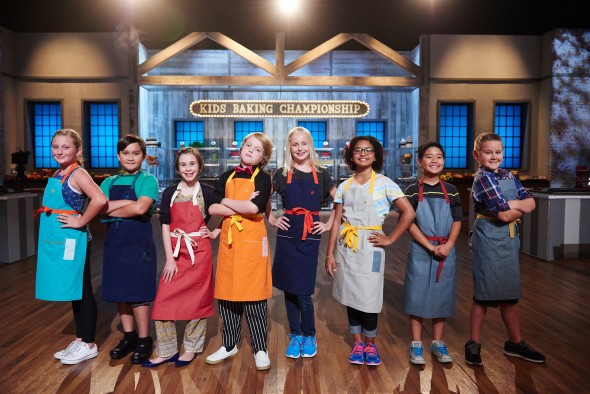 The kids are back in the kitchen. Food Network just announced the sixth season of Kids Baking Championship will premiere in January.

The competition series features a group of children showing off their baking and cooking skills in a series of food challenges. Valerie Bertinelli and Duff Goldman will return as judges.

New York – November 27, 2018 – The New Year gets a sweet start with the return of Kids Baking Championship on Monday, January 7th at 9pm ET/PT on Food Network. A dozen new talented young bakers, ranging in age from 9 to 13, will be tested in difficult dessert challenges during the new season. From sugar cookies to mini cheesecakes, and from macarons to brownies and blondies, Valerie Bertinelli and Duff Goldman mentor the bakers through the tasty tasks to see who will measure up in the competition. Only one will take the cake and the sweet grand prize of $25,000, a feature in Food Network Magazine, and the title of Kids Baking Champion!

“This season of Kids Baking Championship delivers new challenges with surprising twists, making this the toughest most exciting competition yet! Even the most skilled pastry chefs would crumble under the pressure,” said Courtney White, President, Food Network. “The abilities of the young bakers to create outstanding treats is truly remarkable.”

This season showcases exciting new challenges featuring the latest dessert trends, lots of irresistible sweets, and tons of flavor and fun. Throughout the ten episodes the competitors show off their skills and creativity as they whip up impressive confections, from freaky flavor tarts using ingredients like jalapeno, goat cheese yuzu and anise, to dramatically erupting monkey bread volcanoes.

On the premiere, the bakers must serve cupcakes featuring Duff’s favorite ingredient – bacon. But that’s not all, each baker must also include an assigned ingredient like maple, chocolate, peanut, caramel, cinnamon, ginger, or cherry. Just when they get baking, Valerie throws the bakers a curveball and adds another one of her favorite ingredients into the mix – marzipan. The baker that crumbles under the pressure will be eliminated. On Monday, March 11th at 9pm ET/PT, the championship concludes as one talented baker will rise to the top in the grand finale.

What do you think? Are you a fan of Kids Baking Championship? Will you watch the new season?

I would watch another season plus as many more as possible. It’s unbelievable that these children bake so well. Oue granddaughter who is now 8 and her brother who is 6 introduced us to the show in season 4. These 2 love baking a eagerly wait for show each week. Should we not be home we tape it for later viewing. Please don’t cancel