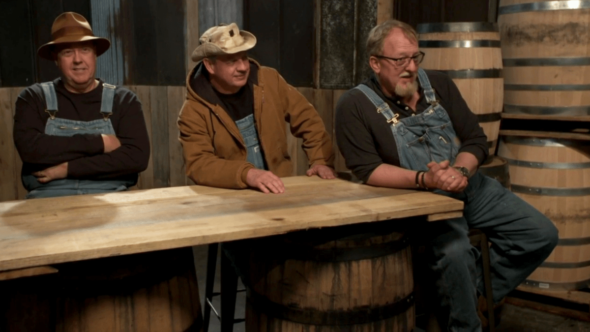 Get ready to watch the booze makers battle it out to find out who is the best in a brand new competition series. Master Distiller will premiere next month, and it will feature three contestants battling it out for the title.

Discovery Channel revealed more about this new series in a press release. Check that out below.

“Three competitors. Three judges. One winning spirit. In an all-new Discovery Channel series, MASTER DISTILLER, America’s top legal and outlaw distillers go head to head in the ultimate booze-making competition to see who has what it takes to join the ranks of the greats and win the title of Master Distiller.

The all-new series, MASTER DISTILLER, premieres Tuesday, March 3 at 10pm ET/PT on Discovery Channel after an all-new episode of MOONSHINERS at 9pm ET/PT.

Across the country, distillers carry on a centuries old tradition. While some operate on the legal side, others perfect their craft in the shadows and beyond the reach of the law. Now, these diverse distillers will compete to earn their place in liquor-making history.

Judged by three legendary Moonshiners – Mark, Digger and Tim of Discovery’s MOONSHINERS – three competitors will faceoff each week in a series of challenges focused on making a specific type of spirit, including American whiskey, rum, gin, mountain brandy, and mezcal among others. Beyond the necessary amount of skill required to complete the challenges, these competitors will need to prove their knowledge of the craft and demonstrate profound creativity as they convert raw local ingredients into authentic, handcrafted spirits that will impress the most seasoned of distilling experts. The champion of each episode will receive a limited release of their winning recipe through Sugarlands Distilling Co.

With bragging rights on the line and a limited run of their winning product on the shelf, who will have what it takes to be named MASTER DISTILLER?

What do you think? Will you check out this new competition series next month?

I STARTED MAKING MOONSHINE After watching the show. I have made wine for a while now and tried making beer but didn’t care for it. I love making shine and have plenty of people to try it since I work in Oil field. I’m not much on drinking but do enjoy tasting while i run my mash. I have sat down with family and friend and drank some, But its more for enjoyment of my friends and family. I would love a chance to be on the show. Im a Navy Vet and thats where I learned to make wine.… Read more »

How does one apply to be on the show? (Asking for freinds).

I was wondering the same thing. Have u found out how yet?