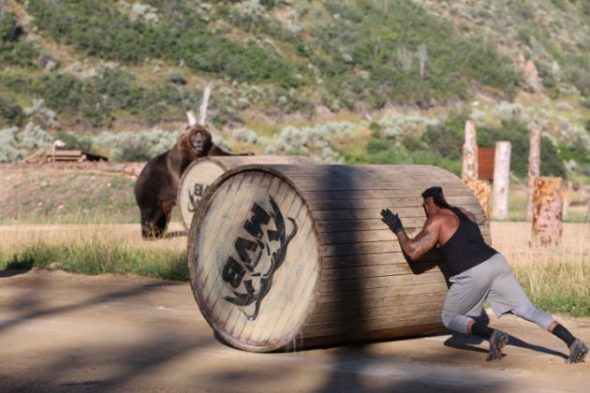 Get ready to see a battle unlike any on television before. Man vs. Bear plans to have human competitors take on grizzly bears in a new Discovery Channel competition series. Viewers can see the first episode of the new series on December 4 at 9pm ET/PT.

Each week, three human competitors will face off against Bart, Honey Bump and Tank in challenges. At the end of the season, the three competitors with the most points will return for another battle against the bears.

Discovery Channel revealed more about Man vs. Bear in a press release. Check that out below.

“Each week, three Grizzlies – Bart, Honey Bump and Tank – will take on three new human competitors at their Utah sanctuary to test the limits of strength, speed and stamina. All challenges will be based on the bears’ natural instincts as well as predatory skills and actions – whether it’s engaging in a monumental game of “tug of war” or using brute force to roll giant logs.

Bart is the largest, most powerful grizzly on the mountain with no other bears matching his strength and versatility. Topping the pack as the fastest is Honey Bump, who is the only female on Bear Mountain. She brings a level of ferocity and predatory instinct that her male counterparts cannot beat. Bart and Honey Bump were orphaned as cubs and discovered by an Alaska State Trooper. After a nationwide search for a loving home for the rescued cubs, they were adopted by caretakers Doug and Lynne Seus. Along with Tank – known for his voracious appetite – the Seus’ have raised and cared for all three bears for two decades on a sprawling section of protected land.

Each episode will include five distinct challenges inspired by what bears do naturally in the wild, pushing these brave men and women to their absolute limits. In the final round, the top two competitors will come face-to-face with Bart, who stands 8 feet 6 inches tall and weighs 1,400 pounds. The human competitor who earns the most points of the day will be named champion.

But the competition isn’t over yet. At the end of the season, the top three competitors with the most points will return one more time for the super-human showdown against the bears.

“Competing against bears is both scary and exciting,” said Ira, an MMA fighter and competitor from Dallas, Texas. “It’s competing against the unknown. This is a completely new challenge for me.”

The series will also include blow-by-blow commentary from on-the-ground experts Brandon Tierney and Casey Anderson.

Brandon is an Emmy Award-winning sports commentator and host of CBS Sports Radio’s nationally syndicated show Tiki and Tierney. He’s no stranger to live sporting events – hosting game coverage for the New York Knicks and serving as a commentator for college basketball for the last 20 years.

Casey is a wildlife expert with 25 years of experience and has lived with bears nearly his entire life. After graduating college, he became a wildlife filmmaker and expert on animal biology and behavior. He’s also the founder of the Montana Grizzly Encounter and has rescued seven bears from inhumane captivity situations.

Grizzlies are extremely clever and lightning fast animals. Do these humans stand a chance? And will the humans be able to prove that they’re the ultimate predators…or simply prey?”

Viewers can learn more about the bears and watch episodes after the air on the Discovery Go app.

What do you think? Will you check out Man vs. Bear when it premieres next month?

I miss Man vs Bear!!!!! I loved the bears and watching the competitors! Now it is no longer on and I miss it! I used to get it on The Discovery channel but it’s not on anymore! I wish it would come on again!!! Beautiful bears with cute attitudes!!!! Hugs to Bart, Honeybump, and Tank!!!!!!

I Love this show its excellent. I would love to be a competitor .

I love the show, just because I get to see three magnificent bears. But I have noticed a few things you need to consider changing. For instance the log roll. The human rolls a log five times their weight, But Bart rolls a log only 2,000 pounds. Hey he always will have the advantage, but lets make it a little more even. Bart needs to be rolling a log that weighs 7,000 pounds, five times his weight, and the surface needs to be improved so the humans do not slip so much, Bart has built in traction (claws). And in… Read more »

Discovery should b ashamed! First I read that they had done the right thing and cancelled it. Should have known greed would take over! Will never watch or support Discovery!!