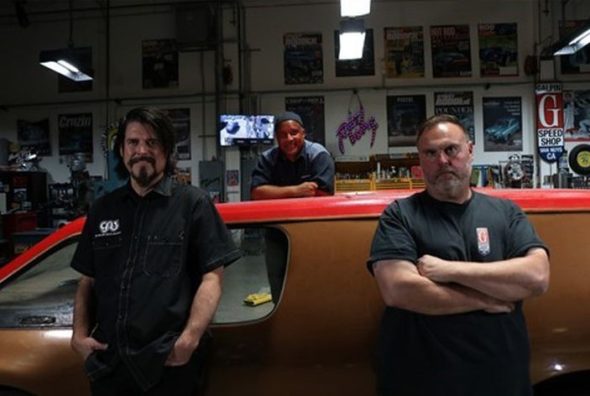 Get ready to take to the road with some amazing cars in Driven. Discovery Channel has announced this new series which will try to take car renovation back in time. The new series will premiere on the network later this month.

Discovery Channel revealed more about this new series in a press release. Check that out below.

“In 1952, Galpin Auto Sports revolutionized the automotive world by becoming the first dealership to ever design, build and sell a custom car, transforming the business into the most storied customization shop in the entire game. Now, Galpin Motors, Inc. president and COO Beau Boeckmann, custom car builder Dave Shuten and customization specialist “Mad Mike” Martin are revving up engines to save automotive history and rescue car culture from oblivion in the brand-new Discovery Channel series DRIVEN, premiering Monday, March 30 at 9PM ET/PT. The series is produced by Pilgrim Media Group, a Lionsgate company.

In the series premiere, Beau Boeckmann and the Galpin crew resurrect a one-of-a-kind Pantera that Carroll Shelby hot-rodded for a secret project with Lee Iacocca. With a focus on vehicle performance and car culture, the Galpin crew will take part in some of the biggest competitions, test their vehicles on the toughest tracks and unveil some of the craziest, most important cars to people around the world.

Beau Boeckmann grew up on the showroom floors of Galpin dealerships and is the mastermind behind Galpin Auto Sports’ entire operation. He’s passionate about all things automotive and is notorious in the motor world for doing anything it takes to find rare, historical cars and original customs. Beau has worked with some of the most iconic figures in the industry and will help his crew source everything they need to make a build work. Builder Dave Shuten created the Galpin Speed Shop with Beau and has spent years restoring classic automobiles like the infamous Pink Panthermobile and constructing custom cars like the Iron Orchid, a one-off period correct ’34 Ford 5-window coupe. Customization specialist “Mad Mike” Martin has made a career of building and wiring outrageous projects and became a household name when his crazy ideas were brought to life on MTV’s Pimp My Ride.

Together, these three masters of motor will uncover historic and one-of-a-kind cars to rebuild and reintroduce back into the automotive history books.

In addition to watching the series on Discovery, viewers can check out new episodes each week by downloading the Discovery GO app. Viewers can join the conversation on social media by using the hashtag #Driven and follow Discovery Motor on Facebook, Instagram, and Twitter for the latest updates.

What do you think? Will you check out this new car series on Discovery?

Too much cussing . So much bleeping that you can’ t understand the sentences .

Great show. Can watch for hours. Wish I could be part of something like that.. I have a 1967 firebird convertible that you guys could make a dream out of.. keep up the awesomeness..

I absolutely love your show. The content is great BUT the loud music playing especially when the people are talking makes it almost unbearable to watch. I’m trying so hard to enjoy the show but the music is so loud I can’t hear what they are saying! It may be to late to correct it this season but I’m hopeful you will correct that for future episodes

The music stepped on the dialog. Distracting and sometimes unintelligible. There are better things to watch with the vast amount of offerings out there.

My kid says that is a brookville aftermarket body. Not an original.

This looks like it could be good to watch but 5 minutes in and I want to turn it off because of the music. Too I think I’m done with it.

The music ruined the show

I agree with Joe the music was too loud and took away from the program, it was so annoying that l may not watch it again. Should not call it music as it was just stupid noise. GET RID OF IT PLEASE.