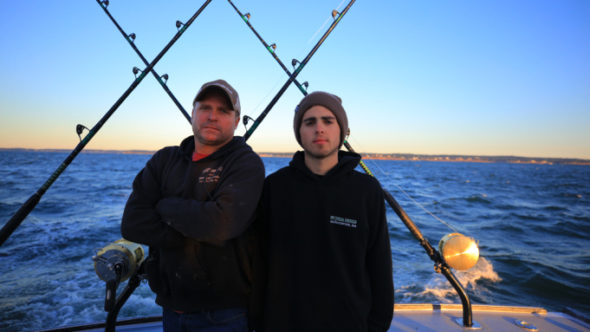 All on the Line is coming to Discovery Channel later this month! The new fishing series will arrive on the network on May 22, and it will focus on the tuna fishermen off the east coast.

“It’s late in the Atlantic Bluefin Tuna season. In the iconic fishing town of Gloucester, Massachusetts, many boats are done for the season. But there are two crews still fighting to land monster tuna and keep their family businesses going through the winter. As the weather worsens, the fish get bigger and the stakes get higher. These monster tuna can weigh more than 1,000 pounds and are reeled in the old fashion way – by hand – making it the ultimate battle of man versus beast. In an all new Discovery Channel series, ALL ON THE LINE, it’s all hands-on deck as these fishermen risk everything to bring home a monster payday.

ALL ON THE LINE premieres Friday, May 22 at 9pm ET/PT on Discovery Channel. In addition to watching the series on Discovery, viewers can watch ALL ON THE LINE by downloading the Discovery GO app. Fans can join the conversation on social media with the hashtag #AllOnTheLine. Follow Discovery on Facebook, Instagram, and Twitter for the latest updates.

The North Atlantic Bluefin Tuna is considered one of the most valuable fish in the world. Due to a limited supply globally, prices can reach as high as a whopping $20K for a single catch. This also means a tight quota to avoid overfishing and encourage sustainability, something that can be reached at any moment and send fishermen home empty handed. To win big, fishermen must reel in the biggest tuna as fast as possible. But there’s a catch: each boat is allowed one catch per day and must reel them in by hand, resulting in a backbreaking battle that can last for hours. With the livelihood of their families on the line and generations of tradition behind them, these families of fishermen will rely on each other and work together towards a shared goal.

Following two fishing boats, the ‘Julia Nicole’ and the ‘Subdivider,’ ALL ON THE LINE spotlights the special dynamic between these two groups and their unique ability to band together in an industry that otherwise demands fierce, sometimes cutthroat, competition.

On the ‘Subdivider,’ legendary and larger-than-life fisherman, Johnny Johnson, has assembled a tight-knit crew in his hunt for record tuna. Johnson joined the Grateful Dead roadcrew in the early 80s and toured the world before ending up in Hawaii where he discovered yellowfin tuna fishing. Chasing the biggest and best is in his blood as his Dad holds the world record for the biggest catfish, which drives him to excel in his chosen field. More mythical force of nature than man, Johnson has his sights set on catching the biggest bluefin tuna the world has ever seen. “One day I’m going to get a world record of my own by catching a fifteen hundred pounder. It’s out there somewhere, and it’s got my name on it.” After chasing the biggest tuna around the world, Johnson has earned a reputation for wanting to help others along the way in order to preserve this unique community and way of life.

At the helm of the ‘Julia Nicole’ is a multigenerational family business – grandfather, father and son. With Dan Smith Sr. taking a backseat to focus on other businesses, he looks to his 18-year old son, Danny Jr., a hockey jock at high school who wants to be “the best fisherman in the world.” While Danny Jr. is eager to prove his worth, if he fails, it’s game over for the three generations of fishermen on the ‘Julia Nicole.’

And while both crews of families acknowledge the risk – from dangerous and unpredictable weather to money wasted once quotas are hit – they’re devoted to their way of life and they wouldn’t trade it for the world. They’re ready to risk it all to bring home a fortune.

What do you think? Will you watch this new fishing series on Discovery Channel?

Awesome show with a great multi generational story line showing the love of fishing and family. Hope to see more of this show next season.

If these guys are so concerned about catching tuna, why do they do it with rod and reel instead of handline they way that the vast majority of Cape Cod fisherman do? Of course it would make for dull tv. A lot less chance of doing something wrong.

Love the show, as good if not better than deadliest catch and wicked tuna. Really like the generational storyline and would like to see more historical side of the areas fishing heritage.

I wish there was more then one episode available. This show is different from Wicked Tuna. Hoping more episode come out soon!

New episode tonight, the 3rd one. Get number 2 on demand

What happened to All on the line?

This sounds very similar to the “Wicked Tuna”. I watch that show all the time and have set the recorder for viewing at a later time. It’s an awesome program. I enjoy watching the “Deadlest Catch” also.

I think Discovery is late to the party on this one.. Wicked Tuna is already 9 seasons deep.

I watch the show.