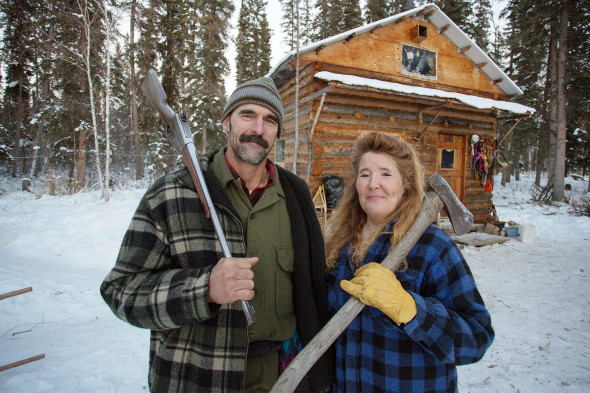 Discovery Channel is headed back up north. The network just announced season four of The Last Alaskans will premiere later this month.

Season four of The Last Alaskans premieres on Discovery Channel on November 25th at 10 p.m. ET/PT.

The Arctic National Wildlife Refuge is the largest protected wilderness in the U.S, and in 1980, the U.S. Government banned new human occupation from the refuge, leaving only seven permits for families and trappers. These modern-day pioneers return in an all-new season of Discovery Channel’s THE LAST ALASKANS with more drive and passion than ever before. This season, they face obstacles brought on by the unforgiving environment, including rising predator competition and the aftermath of forest fires, as well as the deeply personal challenges of trying to raise small children in this world and even battling life-threatening illnesses. These families and trappers will be challenged like never before as they look to continue the unique life they’ve built in the refuge. THE LAST ALASKANS premieres Sunday, November 25 at 10pm ET/PT on Discovery Channel.

No one knows the refuge like Bob Harte. After 40 years in the Alaskan Wilderness, he calls it his country, but due to the return of his cancer, Bob must move away from the refuge and into town with his daughter and granddaughter. This season, we will follow Bob’s hard-fought battle to the end and get the chance to say goodbye. Bob’s journey in the refuge allowed him to live free – this was his home and where his heart will always be.

For Heimo and Edna Korth, this season brings an opportunity they have dreamt of for years: their daughter Krin and her family will attempt to survive a winter in the refuge. Heimo has raised all three of his daughters here, and he hopes for Krin to continue the tradition he and Edna have built over the decades. Heimo will do all he can to pass on the torch of survival to Krin, her husband Scott and their young son Colby, but it will come down to the success of their hunting and trapping season to convince her.

There’s also another new face this season, as Tyler and Ashley Selden bring their baby girl Sidney into the refuge. With a new and dependent member, the Seldens look to improve their property and try to turn it into a functioning homestead that can support a family, but they face the challenge of balancing the demands of being parents, as well as providers for their newest member.

Charlie Jagow faces one of his toughest challenges this season in the aftermath of the summer fires. He assesses the damage from a bird’s-eye view, which reveals miles of black forest. Charlie now must re-establish 40 years’ worth of family traplines, which could potentially take two decades to rebuild. It’s an impossible task, but with the help of maps and instructions Bob left behind, Charlie will follow in Bob’s footsteps and look to come out on top this trapping season.

The obstacles of this season, though significant, serve a great purpose for the families – they have a rebirth in the refuge. Through ingenuity, hard work and a bit of luck, the families work to overcome and rebuild their homes, trails and lives for the success of their future in the Alaskan wilderness.

What do you think? Have you seen The Last Alaskans? Will you watch the new season?

I love this show but heard it was cancelled, I just found this show about 6 months ago, and fell in love with the show

I felt of all the Alaskan reality shows The Last Alaskans was the top of the list of truly believable shows. The characters seemed real because they were real unlike the show at the bottom of the list featuring the Brown bunch. I hope some other network or cable channel picks them up so we can begin to follow the new comers Charlie, and Heimo and Ednas daughter and grand children and 1 or 2 others.

I an hardly wait for The Last Alaskan to start again. I have rewatched the shows so often I might wear them out. I love the program and miss it. Will it be on in 2020?? I sure hope so.

Please put the last Alaskans back on.

I love The Last Alaskans!! I’m looking forward to watching their successes and defeats. They always survive whatever comes their way. I will miss Bob. He was awesome, and I wish his protoje Charlie all the best!!

Please bring The Last Alaskans back , at least an update. You get us hooked on the people, then they are gone! I miss them!

I hope their stories go on. Love this show.

Would love to have a season 5

This is a fantastic show, real reality, great cast and one show Discovery should keep producing. Praying and hoping a season 5 is in the works!!!!!!!!!!!!!!!

Please keep The Last Alaskans on TV it is real and so enjoyable. I record the episodes so I can watch them when I like.

I absolutely love The Last Alaskans. Actually i love all the northern survival shows, alaska or the Yukon, but this is my favourite, led by Heimo Korth.

This has to be one of the best shows on TV. It is unscripted, often spontaneous, and beautifully filmed. I look forward to Season 4 … and 5, 6, 7-on.

I am also a big fan and hope for many more seasons!!!

Love this show, very glad to have another season

I love watching The Last Alaskans! Was sad to see Bob Harte pass. There were time he irritated me but yea. I could watch Edna and Heimo all day!! I must of miss Tyler and Ashley baby being born or is it in the new season? Can’t wait to see…. Oh the BIG fires Alaska had this year. Terrible! Not only Charlie Jagow but others living off the land. I mean off the land. Charlie is young he’s seems quite educated of the woods. He’ll do good I think! He remember’s things his Dad taught him or the way his… Read more »