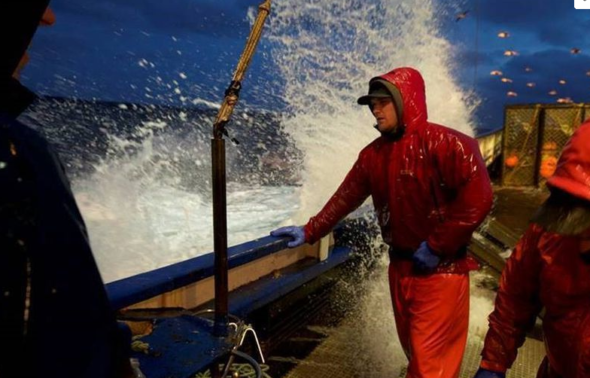 Deadliest Catch is getting ready for its sixteenth season, and fans of the series will see a whole new battle on the series. The Alaskans will take on the Russians for the first time. The series will return with new episodes in April.

Discovery Channel revealed the following about the new season in a press release:

“For the first time ever on DEADLIEST CATCH, the Alaskan crab fleet will face off against their biggest rival – the Russians. A competition so fierce, the captains must push into uncharted territory, including one veteran actually going to Russia. This season will bring new fishing alliances, former Catch captains returning to the fleet and a global, headline-grabbing winter storm that pounds their crab boats. From Original Productions, the multiple Emmy Award-winning series DEADLIEST CATCH returns for its landmark 16th season with a 2-hour premiere on Tuesday, April 14, at 8 PM ET/PT on Discovery.

This year, the Russians are taking an unprecedented move by revamping their crab quota system, and in turn, cutting down on illegal fishing. Now, the price of King Crab is slated to skyrocket, igniting the most cut-throat season yet. The quicker the captains can catch their crab and return to dock, the more money they can make. Everyone is vying for an edge – luring back some of the fleet’s most legendary faces. But just how hard can they push before things get deadly?

The season takes a major shake-up for Captain Jake Anderson, at the helm of The Saga. This year, Jake calls in one of his closest friends: Bering Sea legend and Time Bandit Skipper Johnathan Hillstrand, lured out of retirement in hopes of a historic payday. Johnathan brings his crab quota, while his “protégé”, Jake, provides the boat to catch it. But will this unorthodox approach pay off? Johnathan isn’t the only skipper charging back into the fray. Captain Scott Campbell Jr. returns in the hopes for a multimillion-dollar payday. But will life-threatening back injuries prevent him from hitting the jackpot?

Meanwhile, Northwestern Captain Sig Hansen is hoping for the most profitable season yet, with big plans for a first-place finish. This year, Sig has a jump start on the competition with his daughter Mandy, 24, at the helm for the first solo trip of her young career, before later joining her at the helm as father, and commander. Will Sig’s strategy work? Can Mandy stand up to the pressure? Will they make a solid team? Or will it prove true that you should never mix family with business?

Wild Bill Wichrowski also returns as captain of the Summer Bay. This season, Wild Bill hopes to take advantage of the squeeze in supply caused by the new Russian quota system. The quicker to the market, the higher the dollar. The only problem? He’s down two crew members after firing them just hours before the season launch. Will he be able to find skilled replacements? Or will new blood on deck knock him out before the race even starts?

All eyes are once again on Josh Harris and Casey McManus on the fabled Cornelia Marie. They’ve funneled a fortune into the storied crabber, hoping the new and improved Cornelia will help them beat the Russian and American competition to the dock. This season, they plan to work their crew even harder, including a new crew member who proves to be their secret weapon: Maria, a 25-year-old Alaskan native who has spent most of her life working on boats. She certainly shows the guys more than a thing or two.

Finally, across the fleet, Captain Steve “Harley” Davidson of the Southern Wind, is digging into his bag of tricks to hopefully outsmart the Russians and his own compatriots. And Wizard Captains Keith and Monty Colburn are back as well with big plans to uncover new crabbing grounds. But will their strategy put them head-on with a powerful arctic storm that’s headed straight through the heart of the fishing grounds?

The race for the bounty is on. And this year, it’s the red versus the red white and blue in an all-out war for crab. Forty-foot waves, hurricane force winds, heavy-machinery and massive ice are just a few reasons that no season is ever the same. In addition to watching the series on Discovery, viewers can check out new episodes of DEADLIEST CATCH each week by downloading the Discovery GO app.”