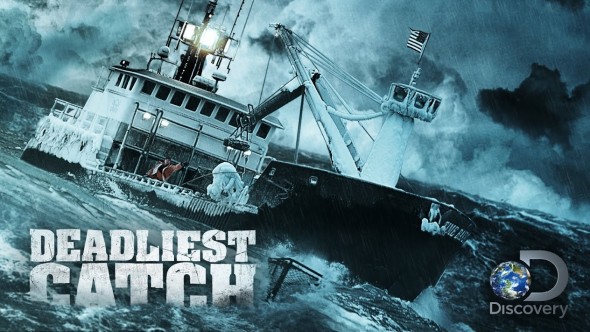 Discovery Channel is headed back up to the icy north. Recently, the network announced season 14 of Deadliest Catch will premiere in April.

The docuseries chronicles the hazardous risks of the commercial fishing industry in the Bering Sea. Season 14 of Deadliest Catch debuts on Discovery Channel on April 10th at 9 p.m. ET/PT. A special live episode will air at 8 p.m. ET/PT in honor of the show’s 200th episode.

(LOS ANGELES) – The captains of the Bering Sea are setting sail in what will prove to be the roughest, toughest and most competitive crab season ever. The captains and crews are putting all their chips on the table to see who can claim the biggest fortune in the Bering Sea. But nature’s wrath is acting out in unusual ways – with injuries and Coast Guard rescues stacking up at alarming rates. Before the season finishes, a crew member is thrown overboard setting off a feverish search. The risks are high, but the rewards can be even higher. No one ever said that the American dream was easy. From Original Productions, the 16-time Emmy Award-winning series DEADLIEST CATCH returns for its landmark 14th season on Tuesday, April 10 at 9 PM ET/PT on the Discovery Channel.

After several lean seasons, the Alaskan crab fleet are back to claim their part of a massive $120-million-dollar bounty. With the lucrative Bairdi fishery opening back up, adding millions of pounds to the pot, there is a renewed sense of optimism. Big money is on the line, the fishing is more competitive than ever and the captains are going to battle to catch as much of the high-value crab as they can. But as always, the biggest battle they face is against a turbulent Bering Sea in the stormy dead of winter.

Before setting sail, the captains will pay tribute and honor their friends and fellow fishermen of the F/V Destination. Last year, the vessel was lost at sea – making a huge impact on this tight-knit community of fisherman and the industry.

After taking last year off, boat owner Josh Harris is back once again to co-captain the Cornelia Marie with Casey McManus. This year, they have 120,000 pounds of King Crab to catch and will need to search for crab fast. But after a year away, does Josh still have what it takes to command a vessel on the Bering Sea?

On the 107-foot Saga, Jake Anderson has completely rebuilt the boat with $750,000 worth of updates, and will begin his season floating on an ocean of debt. This year, Jake’s goal is to make a name for himself on the crab grounds, paying off the mountain of debt, and to do it all independent of mentor and father-figure, Sig Hansen.

Meanwhile, on the legendary Northwestern, Captain Sig Hansen is sick and tired of people telling him how he should live after his near-fatal heart attack. He feels strong and he’s ready to do what he does best. But this year, its every man for himself. The seasoned skipper and crew, led by brother Edgar, plan to dominate the seas on their own – fleet be damned.

Captain Wild Bill is back with his new boat, the Summer Bay, and faces one problem after another as he struggles to make a profit. He loses a huge chunk of crab quota to a competing captain, and battles one of the worst engine failures of his career. But all of that is quickly put into perspective when a deckhand falls overboard in a violent storm.

Captain Sean Dwyer of the Brenna A has every other crabber in his sights this season. With a back-door business deal, he buys up a piece of Wild Bill’s quota out from under him, almost doubling his potential payout for the year. But mother nature knocks him down a peg when the young captain is bashed with one of the biggest waves he’s ever seen, costing him over $30,000 in damages.

And finally, Captain Keith Colburn of the Wizard has his sights set on being the top producer this season, and his goal to out maneuver and out fish rival Sig Hansen. He is no stranger to high risk and high reward, but as the season wears on, a problem develops that could put Keith’s season – and life – in jeopardy.

Forty-foot waves, hurricane force winds, heavy-machinery and massive icebergs are just a few reasons that no season is ever the same. Making matters even worse, the sea is terrifyingly heightened by this year’s super moon, a tsunami and some of the worst winter storms on record. And once again, the crew will have their work cut out for them like never before.

For those who can’t get enough of DEADLIEST CATCH, the series continues on the multi-platform Discovery GO app, where viewers can watch several exclusive interviews and digital content throughout the upcoming season. DEADLIEST CATCH: GREENHORN takes an unprecedented look at the lowest man on board a Bering Sea crab boat: the most dangerous and stressful workplace on the planet. “Conquering Addiction” interviews Nick McGlashan, Matt Bradley, Edgar Hansen and others who have beaten their addiction demons with the help of the captains and the show. The “Captain Trivia Game” asks how well the crews really know their captain? The guys try to guess their captain’s favorite bands, movies, food and other basic knowledge. And on social media, the captains look ahead to the new season on “Return to the Bering Sea,” while “Tales from the Bering Sea” animates their funniest and craziest stories – from pranks and ghost stories, to crew antics and train-wreck greenhorns.

What do you think? Do you watch Deadliest Catch? Will you catch the new season?

We love Deadliest Catch and have met one of the captains years ago. It is a great series. We have watched it since the beginning and would be sad to see Discovery give it up. Please reconsider. If you must, please sell it to a station we watch that’s free of extra charge. Thanks.

We have watched Deadliest Catch since the beginning years ago. Please, please keep this wonderful series!!! If you don’t at least sell it to a network that is FREE to watch. So many series are going on to pay streaming. Thanks for your consideration.