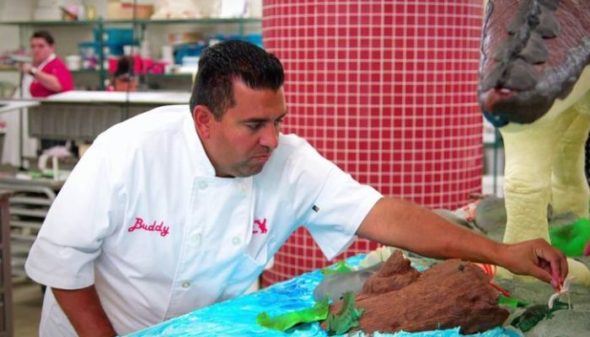 Big Time Bake is coming to Food Network. The new dessert competition series will be judged by Buddy Valastro, who fans knows from Buddy vs. Duff. The competition will consist of six hour long episodes. The series will arrive on the small screen next month.

Food Network revealed more about the new series in a press release. Check that out below.

“After winning the most recent season of ultimate baking brawl Buddy vs. Duff, Buddy Valastro is now judging some of the best bakers from across the country to the test in a nonstop dessert competition on Big Time Bake, premiering on Monday June 8th at 9pm ET/PT. With only six hours, the competitors must bake creative cookies, decadent cupcakes and a showpiece cake all inspired by a surprise theme. The clock never stops, even during the judging, as Buddy and the guest judges visit each baker’s station every two hours to taste and critique their sweets. Buddy and two rotating expert judges, including Nacho Aguirre, Ralph Attanasia, Zoe Francois, Tregaye Frasier, Dan Langan, Lorraine Pascale, Aarti Sequeira, Thiago Silva,and Kristen Tomlan will determine the baker’s item on the bottom of the batch and will send them home without finishing their remaining items. It’s a battle against the clock!

“The competitors must bake the best cookies, cupcakes, and cakes that not only taste delicious, but also impress Buddy Valastro with the technique and presentation,” said Courtney White, President, Food Network. “On top of preparing the desserts, the bakers must strategize to use their time wisely, making Big Time Bake one of the most difficult competitions.”

In each of the six hour-long episodes, four bakers along with their assistants must complete cookies, cupcakes and an outstanding cake from scratch in only six hours. The baked goods must fit a special theme, from spellbinding magical confections, to tasty treats that transport the judges to another realm, and to desserts that dive deep into the blue seas. After two hours of the competition, Buddy and the guest judges visit each baker’s station to taste the cookies, but time will still be running out so the bakers must continue working during the judging. One baker’s cookies will leave them crumbled in the competition and will be eliminated without finishing their other items. At the fourth hour of the competition the cupcakes are due, and time in the competition will run out for the bottom baker. With two bakers remaining and two hours left until the six hours are up, they must rush to finish their masterpiece cakes.”

What do you think? Do you plan to check out this new baking series next month?

I Like the other celebrity guests on this show but Buddy Valastro is a complete turnoff. He’s an egotistical, blow-hard, sore loser and I will never watch him again on any show.