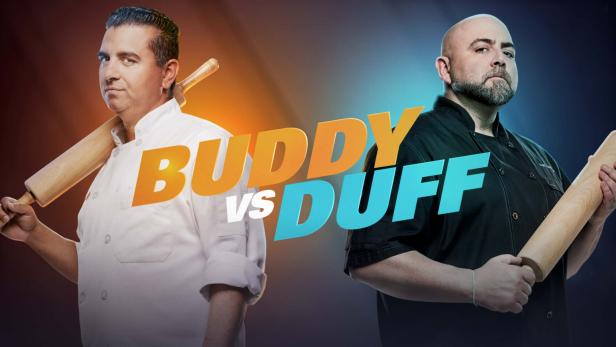 Get ready for more baking with Buddy vs. Duff on Food Network. The series has been renewed for a second season, and production has already begun on eight brand new episodes. Buddy Valastro and Duff Goldman are featured in this cooking competition series.

Food Network revealed more about the renewal of the series in a press release. Check that below.

“Food Network has ordered a new season of Buddy vs. Duff, the network’s highest-rated series of 2019, it was announced today by Courtney White, President, Food Network. The high-stakes freshman series reached over 14 million viewers in its premiere season and grew ratings more than 40% for its timeslot vs. YAGO for P25-54.

On the series, elite bakers Buddy Valastro and Duff Goldman face-off in an epic baking battle for the chance to be crowned the undisputed king of cake. Production begins this week on the eight-episode second season of the competition will challenge every aspect of what it means to be a true pastry artist and cake master. The series is scheduled to return in March 2020.

‘Audiences were captivated by the real-life rivalry between Buddy and Duff, the extraordinary intensity of the competition and the exquisite works of art created by these two titans of baking,’ said White. ‘As the biggest names in cake, they have a lot at stake in the competition and will lay it all on the line to prove they are the best in the business.’”

What do you think? Will you check out season two of Buddy vs. Duff? Did you watch season one?

I really liked the show. I agree w/the other comment about Buddy being a baby, but I think some of his creations are really interesting. I like Duff because he had a bakery in Baltimore. I always back the home team!

I cannot wait for season 2! My family and I watched every episode together! We all made comments and bets based on our opinions. In the end we ALL picked Duff!

Duff Got Robbed on a Few of Those Challenges and Buddy is nothing but a cry baby if he loses. Duff is the Better Person overall. This show should not get a season 2. It will be the exact same thing. Duff Wins, Buddy Cries and complains and then he wins Challenges he should have lost.

I have only seen a few episodes of Cake Boss and one of the shows the Cake was all wood and Fondant with a tiny, tiny bit of cake. He thinks he is all that. When it clearly shows on everything that he Sucks.