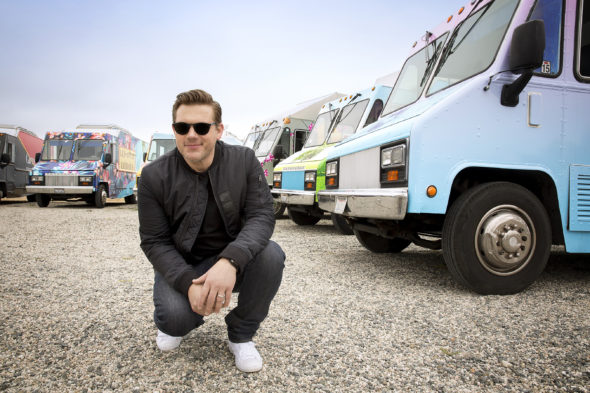 The Great Food Truck Race is back on. Recently, Food Network announced the TV show’s ninth season will premiere in July.

Hosted by Tyler Florence, the new season of the competition series “takes a culinary road battle through the Wild West this summer, with seven teams of food truck hopefuls competing to win a $50,000 grand prize.”

NEW YORK – June 20, 2018 – The Great Food Truck Race takes a culinary road battle through the Wild West this summer, with seven teams of food truck hopefuls competing to win a $50,000 grand prize. Hosted by Tyler Florence, the trip hits hot spots in the Southwest to test the competitors’ cooking chops, selling skills and business savvy. Each week, the teams hit a new city for fierce food challenges, and the least successful truck heads home – until the one team left standing is awarded $50,000. The Great Food Truck Race kicks off Thursday, July 26th at 9pm ET/PT and the winning truck will be named in the season finale on Thursday, August 30th at 9pm ET/PT on Food Network.

“Every summer, our viewers look forward to hitting the highway for a scenic road trip with a brand-new roster of food trucks,” said Courtney White, Executive Vice President, Programming, Food Network and HGTV. “These teams bring their food and business A-game to the race, but only one will cross the finish line $50,000 closer to achieving their dreams.”

In the season premiere, the race kicks off at a cattle ranch outside of Los Angeles, where the teams must hand squeeze orange juice to get the keys to their truck. Later, each team has to create a dish with cuts of beef won in an auction and add it to their menu. Upcoming episodes feature an ultimate shrimp dish challenge in Las Vegas; battle of the beverages in Phoenix; a visit to the historic Territory Prison in Yuma; a date-themed competition in Coachella Valley and a Mexican-flavored return to Los Angeles for the finale where the last truck standing wins $50,000.

Viewers can meet the competing teams and browse photo highlights of the challenges at FoodNetwork.com/FoodTrucks. Tell us who you think should take home the grand prize on social media using the hashtag #GreatFoodTruckRace.”

What do you think? Have you seen The Great Food Truck Race? Will you watch the new season?

Love the show! Can’t wait to watch it. Hope it goes on for years!