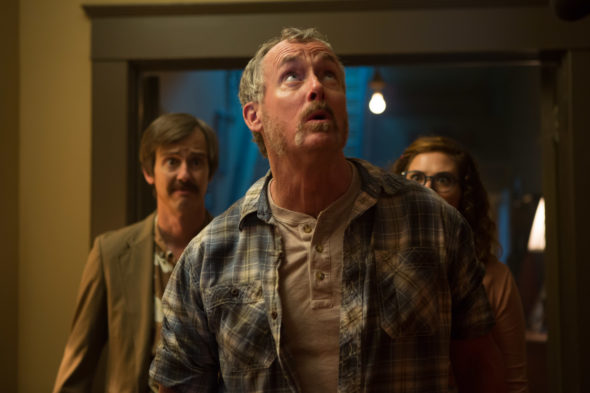 Has Stan Miller returned to his couch, for good? Is the Stan Against Evil TV show cancelled or renewed for a third season on IFC? The television vulture is watching all the latest cancellation and renewal news, so this page is the place to track the status of Stan Against Evil, season three. Bookmark it, or subscribe for the latest updates. Remember, the television vulture is watching your shows. Are you?

Airing on the IFC cable channel, Stan Against Evil stars John C. McGinley, Janet Varney, Nate Mooney, and Deborah Baker Jr. Guest stars in season two include Denise Boutte, Jeffrey Combs, David Koechner, Patty McCormack, and Steven Ogg. Set in the seemingly quaint but haunted small town of Willard’s Mill, New Hampshire, the story centers on disgruntled former sheriff Stan Miller (McGinley). In the second season, a reluctant Stan has to investigate the disappearance of his replacement, Sheriff Evie Barret (Varney), who — in the season one finale — found herself stranded in the year 1692, where she was convicted of witchcraft and sentenced to being burned at the stake.

The second season of Stan Against Evil averaged a 0.06 rating in the 18-49 demographic and 171,000 viewers. Compared to the season one, that’s down by 16% and 8%, respectively. Find out how Stan Against Evil stacks up against other IFC TV shows.

Although it premiered to similar ratings to last year, season two of Stan Against Evil ended up being down slightly in the ratings. To be frank, IFC TV series do so poorly in the Nielsens ratings that those figures aren’t all that useful to this television vulture, particularly when it comes to my dinner plans. AMC Networks now owns IFC and it seems to be more of a creativity lab for the parent company than a breadwinner. Still, they want to attract viewers and run programming people actually watch, so at some point, viewership matters. I suspect that Stan will return for a third season but the show could easily be cancelled. Subscribe for free alerts on any Stan Against Evil cancellation or renewal news.

What do you think? Should IFC cancel or renew its Stan Against Evil TV show for a third season? How long do you think this IFC TV series will last?

I watched both seasons and I was like this show is so f***ing funny absolutely love Denise and all the characters Stan is like a real person would be like all of the them. KEEP STAN AGAINST EVIL ON

I cannot express how much I enjoy this silly program. I do not watch this type of programs usually. I do not watch comedy at all, BUT, this program made me roar with laughter…without pot.
God bless, this was so fricking funny. What a surprise, I love this crazy series.

Renew it, my grandson and I love that show. We watch episodes on demand, even though we’ve seen them all.

I love the show, it’s hilarious. I love the characters. I hope it continues for a long time.

I absolutely adore Stan Against Evil. I especially love Denise and Evie, they are absolutely hilarious. Wish the language was milder, though; don’t like all the GD’s and J’s. So happy it’s renewed for season three. I could watch it for the next 20 years!

Renew the show it is hilarious John McGinley’s humor is awesome.

This is my favorite show in years, I show it everyone!!

I am hoping to see Stan Against Evil season three is made and also a few additional episodes please!!!! It is so entertaining.

Definitely renew Stan Against Evil!! Television needs this show! And Stan, Mr. John C is fantastic and his one-liners cause a laughter juggernaut. Janet as Evie is the perfect sheriff and balance to Stan. I love it all. Season 3 here we come!

I LOVE this show, so reminiscent of Bruce Campbell. It’s great, finally get to watch something besides reality shows. Please keep going with with Stan Against Evil.

A pipe to the head never fails…lol. Please renew Stan Against Evil for Season 3.

I’d really love for their to be a third season. I need to know what’s happens, For me the show in humorous but can also get serious when it needs too, I think it’s has a guys balance. Hoping it gets renewed.

I love this show! My friends and I are praying for a season three

I would love a season 3 I just got into the series, and now I am left hanging here.

I’d love a season three but them starting to air two episodes every week has me worried that the writings on the wall.