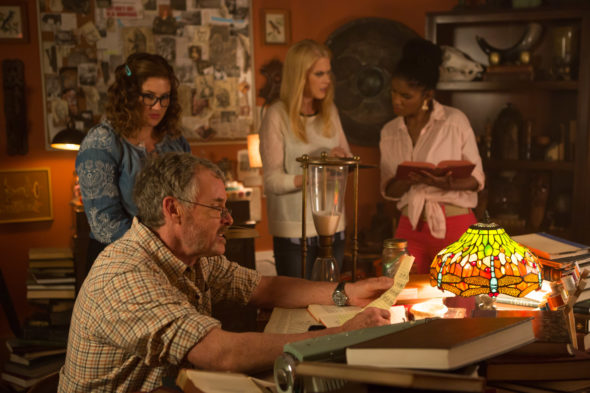 An IFC comedy-horror, Stan Against Evil stars John C. McGinley, Janet Varney, Nate Mooney, and Deborah Baker Jr. Set in Willard’s Mill, New Hampshire, the TV series follows disgruntled former sheriff Stan Miller (McGinley). At the end of the second season, Stan and his replacement, Sheriff Evie Barret (Varney), inadvertently open a door to the past, which allows demons from the 1600s to bedevil their town.

Stan Against Evil: A Look at the Ratings

The second season of Stan Against Evil averaged a 0.06 rating in the 18-49 demographic and 171,000 viewers. Compared to the season one, it was down by 16% and 8%, respectively. While those ratings seem like they should spell cancellation, IFC TV shows are not big Nielsen winners.

Learn more about the Stan Against Evil season three renewal from this IFC press release.

LOS ANGELES – January 12, 2018 – IFC announced today that horror-comedy series Stan Against Evil has been picked up for a third season slated to air in Fall 2018. Created by Dana Gould (The Simpsons, Parks and Recreation) and starring John C. McGinley (Scrubs) and Janet Varney (You’re The Worst), Stan Against Evil has grown its dedicated fan base since originally debuting in 2016, with The New York Times calling it a “gruesome, deadpan delight.” Season 2 concluded in November 2017 with Stan Miller (McGinley) and Sheriff Evie Barret (Varney) accidentally opening a portal into the past, allowing the 17th century demons to create new mayhem in their quaint town of Willard’s Mill.

Stan Against Evil follows Stan Miller, the perpetually disgruntled former sheriff of a small New England town, and Evie Barret, his younger, more spirited successor, and how the two are forced into an unlikely alliance upon realizing their sleepy little town is the subject of a 300-year-old demonic curse. Willard’s Mill, it turns out, was the sight of a massive 17th century witch burning and as such, Stan and Evie are forced into battle against demons, witches, haunted ponies, giant piglets, evil babies, you name it, all while trying to bridge their chasm-wide personal differences.

For continued updates on Stan Against Evil, please check out:

IFC is the home of offbeat, unexpected comedies.  Series Portlandia, Stan Against Evil, Baroness von Sketch Show, Documentary Now! and Brockmire air alongside fan-favorite movies and comedic cult TV shows. IFC is owned and operated by AMC Networks Inc., and available across multiple platforms. IFC is Always On, Slightly Off.

What do you think? How do you like the Stan Against Evil TV series? Did you expect IFC to cancel or renew it for a third season?

Awesome. This is the perfect show and should only gain viewers. It’s got everything. A little scary. John is his usual hilarious self that gives horror fans and comedy fans a perfect combination. I love IFC for keeping it but if this show was on a more known channel it would be much higher in ratings. Very happy huge fan here. I’m a Marine and our squad never misses an episode. We even watch the reruns. I think a ton of people DVR this show also which is why the audience dont show up paper! Semper fi!

Along with the SyFy shows Happy and Z Nation, Stan Vs Evil, proves there are still imaginative people writing for television. May Stan and his trusty shovel reign!

I am SO HAPPY that “Stan Against Evil” has been picked up for a third season! This show is funny, scary, serious, sad – AMAZING!