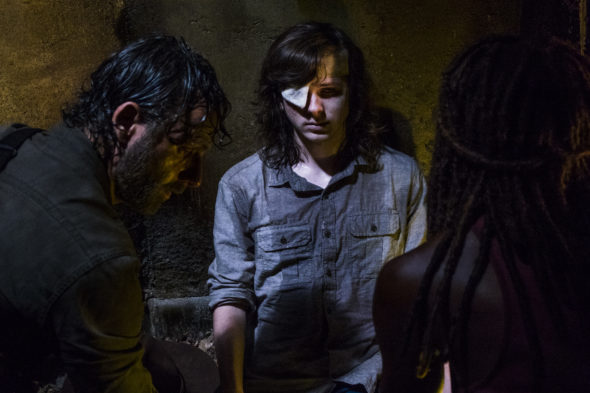 The dead still walk the earth. AMC has renewed The Walking Dead TV show for a ninth season. Scott M. Gimple has been promoted from showrunner to the new position of Chief Content Officer, from which he will oversee all of the network’s Walking Dead-related properties. Meanwhile, writer and co-executive producer, Angela Kang, will be the series’ new showrunner. Season eight, which is currently on hiatus, returns to AMC on Sunday, February 25, 2018 at 9:00pm ET/PT. Season nine is expected to debut late in 2018.

The Walking Dead: A Look at the Ratings

The eighth season of The Walking Dead is averaging a 3.79 rating in the 18-49 demographic and 8.63 million viewers. Compared to season seven, that’s down by 30% and down by 24%, respectively. Despite that significant drop, the series is far and away the highest rated TV show currently on AMC.

In his new role, Gimple will oversee The Walking Dead‘s vast TV universe, including both the flagship and spin-off Fear the Walking Dead, as well as gaming and future brand extensions on a variety of platforms, among other areas. Writer/co-exec producer Angela Kang (pictured below) has been promoted to executive producer and showrunner, replacing Gimple in the latter role, of The Walking Dead. Kang has been with The Walking Dead since 2011, writing some 20 episodes of the show, including critically praised hours including “Coda” and “Still.” Kang will take over as showrunner starting with season nine, which will premiere in late 2018.

“This is an enormously important day for the entire The Walking Dead television universe. We are proud to acknowledge Angela’s significant contribution to the series and to set a clear path forward for a ninth season under her direction. Further, with gratitude and admiration, we also recognize Scott’s broad impact on, and leadership of, the content that fuels our TWD universe. Together, we will dream bigger and more broadly than ever before,” said Charlie Collier, president of AMC, SundanceTV and AMC Studios. “I know I speak for Angela, Scott and everyone at AMC when I say thanks most of all to the fans and the many talented people who have helped AMC play Dead.”

What do you think? Are you still a fan of The Walking Dead TV series? When do you think it should end? Let us know, below.

I’m a true blue fan of TWD since first season ,never borning to me it can’t always be violence, years are passing by and thier has to be a cool down period and story line to continue… I’ll be lost on sundays without TWD…

#TWD is my favorite show, love it, never boring, please dont cancel it..the cast is amazing, have Morgan bring everyone to Hilltop & make it one show, I dont like FTWD its like a knock off of TWD like Charlie she is like Carl, & the lady with the man in the wheel chair talks like abraham, TWD had a tornado FTWD had a hurricane, Alisha is like Carol wanting to be left alone, TWD is everything to me & alot of other people after Rick goes there will only be 2 originals, Daryl & Carol my 2 favorite characters,… Read more »

I hope this show never ends. It has that “keep you on the edge of your seat” that appeals to me. Keep it going…

Tired of whole episodes dealing with one character at a time. Rick has been threatening to kill Negan, for close to 3 yrs now, and I’m getting sick of the anticlimactic story line. Used to love the show, now I find myself fast forwarding to the end to keep from wasting my time. Cancel it, and FTWD.

Love this show.. interested to see where Kang takes it.. and even more excited to see how they merge TWD with Fear TWD.

I was done when they killed off Hershel. Not just that he was killed off but in the manner by which he was killed. The show has gotten far to dark for my taste. There is enough darkness in the real world…I don’t need to see it as fiction on TV. We need more positive uplifting shows!!!!

Definitely, love the Walking Dead, but stop killing off all of the good actors.

The show has been awesome, I love every minute, look forward to it every week

What a shame, it needs to be finished. Money already destroyed this show.

The first half of this season was long, drawn-out and boring. They better pick up the pace or I’m gone.

I still want to know if Andy signed his contract. Instead of firing Gimple for his bad writing they promote him. Idiots. Really don’t care or listen to the fans. I will watch the back end of season 8 but after that I believe I’m done.