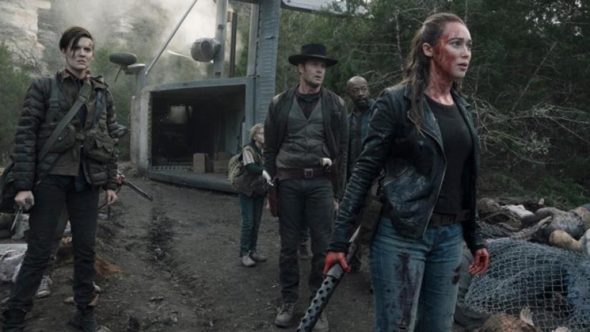 It’s hardly surprising that AMC has renewed Fear the Walking Dead. The series has earned consistent ratings since it debuted in 2015. So far, season five is averaging a .47 rating in the 18-49 demo and 1.665 million viewers.

And what can fans expect from the rest of season five? At San Diego Comic-Con, co-executive producer Scott Gimple revealed Colby Minifie, Peter Jacobson and Colby Hollman are joining the series and season 5B will expand the series’ universe:

The big secret is that there have been other civilizations that have survived the apocalypse. We are about to show a lot more.”

What do you think? Do you watch Fear the Walking Dead? Are you glad it’s been renewed?

Not glad it has been renewed for a sixth season. The show needs to end. The story no longer follows what’s expected. I will not continue to watch.

I love watching the fear. I didn’t care for season 4 but got back into it on season 5. The Walking Dead is my favorite tho

I really enjoy this show, as well as the Walking Dead. Both shows provide a real escape from reality.

Yes I love Fear The Walking Dead!! So happy it’s been renewed