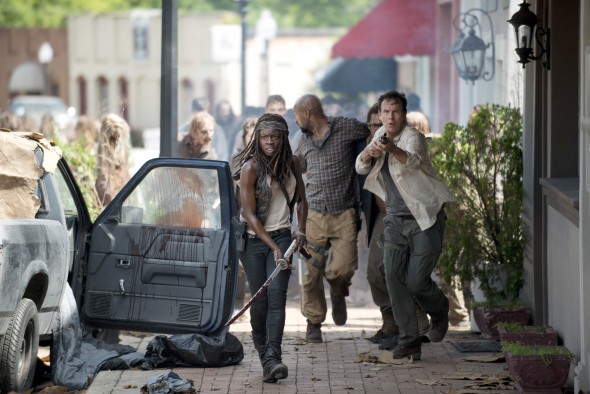 Those zombies are going to keep on coming. AMC has announced that their top-rated TV show, The Walking Dead, has been renewed for a seventh season. Season six is currently airing and drawing very high numbers once again.

In addition, the cable channel has renewed companion series Talking Dead for a sixth season.

#1 SHOW ON TELEVISION AMONG ADULTS 18-49 WILL RETURN FOR ITS SEVENTH SEASON IN OCTOBER 2016,

FOLLOWED BY EPISODES OF “TALKING DEAD”

NEW YORK, NY – October 30, 2015 – AMC announced today that it has renewed “The Walking Dead,” the #1 show on television among adults 18-49 for the last three years, for a seventh season. In addition, AMC has renewed “Talking Dead,” the live after-show hosted by Chris Hardwick that ranks in the top 10 across all television among adults 18-49, with new episodes to follow “The Walking Dead.”

“Thank goodness someone had a Magic 8-Ball with them in our many long internal meetings about these renewals. When, on the third shake, ‘without a doubt’ filled the murky blue screen, we knew we had to proceed with new seasons of ‘The Walking Dead’ and ‘Talking Dead,’” said Charlie Collier, president of AMC, SundanceTV and AMC Studios. “All joking aside, we are so proud to share these shows with fans who have been so passionate, communicative and engaged. We are grateful for and continually impressed by the talent, effort and excellence on continuous display by Robert Kirkman, Scott Gimple, Chris Hardwick and the many people with whom we partner to make these unique shows possible. The result: More Walking and Talking. Hooray.”

Following a free premiere event with 13,500 screaming fans at Madison Square Garden, “The Walking Dead” has kicked off its sixth season with impressive social activity, drawing nearly 20 million social engagements between premiere week and episode 3 and ranking as the #1 most engaging drama. Since last year’s premiere, “The Walking Dead” has gained 5.5 million new fans across social media, now tracking with an audience of nearly 40 million. Instagram has surfaced as “The Walking Dead’s” fastest-growing social platform, with the show capturing more than 8% of the industry’s engagement so far this season, up 25% from last year. Meanwhile, the series’ audience size has more than tripled on Instagram, while total engagements have jumped 325% from this point last year, with 8 million total engagements for the season to date.

Around the world, season seven of “The Walking Dead” will again be “First on FOX,” with FOX International Channels (FIC) bringing the show to audiences globally in all of its 125+ markets as part of FIC’s continued commitment to broadcast the series day-and-date internationally. Following the U.S. trend, “The Walking Dead” continues to break records overseas and has more than tripled its numbers on FOX since its launch.

Whether commemorating favorite films from every genre and decade, or creating acclaimed original programming, AMC brings to its audience something deeper, something richer, Something More. The network reigns as the only cable network in history ever to win the Emmy® Award for Outstanding Drama Series four years in a row with “Mad Men,” and six of the last eight with back-to-back honoree “Breaking Bad.” The network boasts the most-watched drama series in basic cable history and the number one show on television among adults 18-49 for the last three years with “The Walking Dead.” AMC’s current original drama series include “The Walking Dead,” “Better Call Saul,” “Hell on Wheels,” “TURN: Washington’s Spies,” “Halt and Catch Fire,” “Humans,” “Fear the Walking Dead,” and the forthcoming “Into the Badlands,” “The Night Manager,” “Broke” and “Preacher.” AMC also explores authentic worlds and discussion with original shows like “Talking Dead,” “The Making of The Mob,” “Comic Book Men” and the upcoming “Ride with Norman Reedus” and “The American West.” AMC is owned and operated by AMC Networks Inc. and its sister networks include IFC, SundanceTV, BBC America and WE tv. AMC is available across all platforms, including on-air, online, on demand and mobile. AMC: Something More.

I love the walking dead its such a great show and i’m happy that the show got renewed .

It never even occurred to me that there would not be a Season 7 – but of course, there will!
This makes me very happy!!