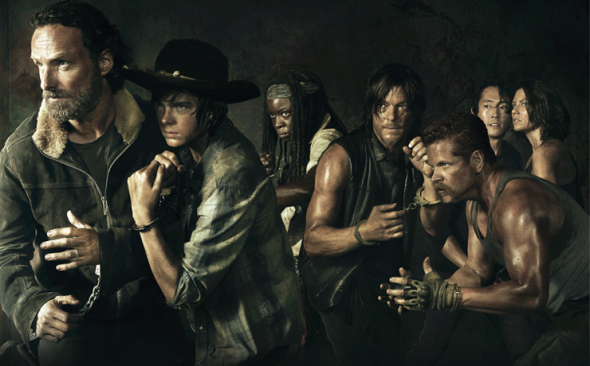 AMC has renewed one of the biggest shows on television — The Walking Dead — for a sixth season. The fifth season debuts this Sunday, October 12th, at 9pm.

DAYS BEFORE THE SEASON FIVE PREMIERE, AMC RENEWS “THE WALKING DEAD” FOR A SIXTH SEASON

#1 Show on Television Among Adults 18-49, and Highest-Rated Show in Cable History, Returns for Its Fifth Season at 9 PM ET/PT on October 12, Followed by Live “Talking Dead” Aftershow

New York – October 7, 2014 – Days away from its season five premiere, AMC announced today that it has renewed “The Walking Dead,” the #1 show on television among adults 18-49 for the last two years and most highly-rated show in cable television history, for a sixth season. The season five premiere is this Sunday, Oct. 12, at 9 p.m. ET/PT, followed by the live season premiere of “Talking Dead” at 10 p.m. ET/PT with host Chris Hardwick and this week’s guests Scott M. Gimple, Greg Nicotero and Conan O’Brien.

“We could not be more excited for October 12th as we share new episodes of ‘The Walking Dead’ with fans around the globe,” said AMC President Charlie Collier. “In advance of Sunday’s season five premiere, AMC proudly confirms a sixth season order of this extraordinary series. Thank you to Robert Kirkman, Scott Gimple, the terrific executive producers, and the entire team who brings this compelling world and these rich characters to life. There’s plenty more Dead ahead thanks to their impressive, collective effort.”

Social media activity and interest around “The Walking Dead” is up significantly from the same period a year ago. For several weeks leading up to the season five premiere, the show has been #1 in digital engagement of all returning fall cable series, as measured by the ListenFirst Digital Audience Rating. The show’s social media following and fan engagement are at an all-time high with more than 30 million Facebook fans and 2.7 million Twitter followers, while video views of scenes and trailers for the upcoming season are well outpacing last year’s results.

For season six, Scott M. Gimple will return as the series’ showrunner and executive producer along with executive producers Robert Kirkman, Gale Anne Hurd, David Alpert, Greg Nicotero and Tom Luse. AMC also recently announced that it has ordered a pilot for a potential companion series to “The Walking Dead,” based on a new story and new characters from Robert Kirkman.

Around the world, “The Walking Dead” will again be “First on FOX,” with FOX International Channels (FIC) bringing the show to audiences globally within 24 hours after the U.S. launch. Season 5 premieres on October 13 in all of its 125+ markets as part of FIC’s continued commitment to broadcast the series day-and-date internationally. Following the U.S. trend, “The Walking Dead” continues to break records overseas and has more than tripled its numbers on FOX since its launch.

Whether commemorating favorite films from every genre and decade, or creating acclaimed original programming, AMC brings to its audience something deeper, something richer, Something More. The network reigns as the only cable network in history ever to win the Emmy(R) Award for Outstanding Drama Series four years in a row with “Mad Men,” and six of the last seven with current back-to-back honoree, “Breaking Bad.” The network boasts the most-watched drama series in basic cable history and the number one show on television among adults 18-49 for the last two years with “The Walking Dead.” AMC’s original drama series include “Mad Men,” “Breaking Bad,” “The Walking Dead,” “Hell on Wheels,” “TURN: Washington’s Spies,” “Halt and Catch Fire” and the forthcoming “Breaking Bad” prequel, “Better Call Saul.” AMC also explores authentic worlds with bold characters through its slate of unscripted original series like “Talking Dead,” “Comic Book Men,” “Game of Arms” and “4th and Loud.” AMC is owned and operated by AMC Networks Inc. and its sister networks include IFC, SundanceTV, and WE tv. AMC is available across all platforms, including on-air, online, on demand and mobile. AMC: Something More.

What do you think? Are you still watching? Was it a smart move to renew this show so far in advance?

hey, rose is right. I am 70 and always loved the horror genre. since the xfiles went off the air I was so upset, then years later FINALLY! a show worthy to get excited over. I wish it never gets cancelled. one thing that bugs me, I hope Ricks son loses that hat lol

WOW…Glad that last episode is over with. I just hope that we don’t have to sit through another “family individual ” profile taking up an entire episode. I mean, I understand it…but, we have limited time here before the “Season Finale” where we’ll have to wait another 6 months to continue the SLOW moving story line. Maybe, in the next little town there will be one of those mega-car dealerships with some leftover Hondas where we can pack up the family and hit the road to somewhere….anywhere. Or…..maybe another “Hershel” type ranch/ farm where our Walking Hereos could actually own… Read more »

When are they going to realize that it’s probably the top rated show among those of us well OVER that 49 yr old cut off? I just hate that we don’t count, especially since I love The Walking Dead just as much as the younger group does.

Dah! Is anyone surprised? The first line basically says it all. “#1 Show on Television Among Adults 18-49, and Highest-Rated Show in Cable History”