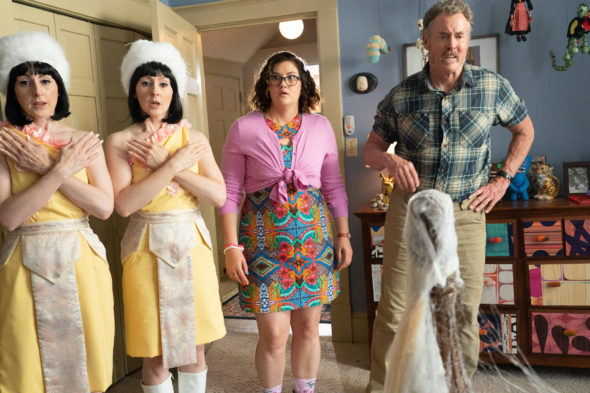 Are you still standing with Stan during the third season of the Stan Against Evil TV show on IFC? As we all know, the Nielsen ratings typically play a big role in determining whether a TV show like Stan Against Evil is cancelled or renewed for season four. Unfortunately, most of us do not live in Nielsen households. Because many viewers feel frustration when their viewing habits and opinions aren’t considered, we’d like to offer you the chance to rate all of the season three episodes of Stan Against Evil below.

An IFC horror-comedy from Dana Gould, Stan Against Evil stars John C. McGinley, Janet Varney, Nate Mooney, and Deborah Baker Jr. Guest stars in season three include Scott Adsit, Maria Bamford, Matt Braunger, Christopher Mintz-Plasse, and Eddie Pepitone. Set in a seemingly quaint but haunted New Hampshire village, the story centers on disgruntled former sheriff Stan Miller (McGinley). This installment kicks off right after last season’s finale, when Stan traveled through time to save his dead wife, which opened a portal between the Land of the Living and the Land of the Dead. Now he and Evie (Varney) must deal with the evil forces taking over Willard’s Mill —- which could involve making a deal with the devil.

What do you think? Which season three episodes of the Stan Against Evil TV series do you rate as wonderful, terrible, or somewhere between? Should IFC cancel or renew Stan Against Evil for a fourth season? Don’t forget to vote, and share your thoughts, below.

Hulu should pick it up and makr more. Im tired of shows like this not even getting really a chance cause of ratings. I showed this show to my family and they liked it. You know people have other ways of watching tv what happens if the reatings are really not right.

Considering I started watching the show because I was bored I was somewhat shocked to find that midway through s2 I was addicted. I don’t want to live without my weekly fix of Stan against Evil. I know it’s not to everyone’s taste but creator Dana Could has woven a masterpiece of slapstick and spookery where you really do care about the characters. I really want to see Denise and Kevin marry and have babies – can you just picture Stan’s speech at the wedding?? I think I’d miss evil old Constable Eccles and his shambolic army of inept minions… Read more »