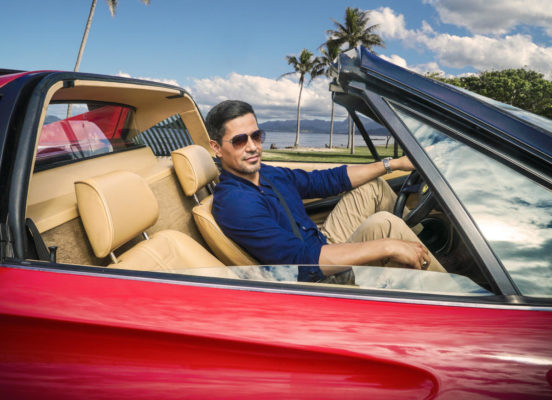 Hawaii Five-0 is currently in its ninth season, MacGyver is in its third season, and Magnum PI is in the middle of its freshman season. So far, Magnum PI is the only one out of the three CBS series to be renewed for the 2019-2020 season.

This is a question I’ve never heard before. We talk about it a lot in the room, how to do it. I think there’s a way to do it, it’s just logistics. … We’d love to make that work out.”

What do you think? Do you watch Hawaii Five-0, Magnum PI, and/or MacGyver? Would you enjoy a crossover?

I wish they would change their mind about cancelling Hawaii five-o.i also would like to know how to contact mr lenkov.

Magnum is a WASTE…FIVE O IS OUTSTANDING MAKING A HUGE MISTAKE…VIEWERS WILL NOT SUPPORT A POOR REPLACEMENT like Magnum HAS BEEN..NOT FOR LONG…SOMEONE AT CBS MADE A POOR FINANCIAL MOVE HERE!

Sure McGyver chasing crooks to Hawaii and take it from there!

As a fan of all three shows, I like the idea of a crossover, but here’s what’s frustrating about this. When one (or all) of the shows goes into syndication, say five or six years from now and you’re sitting down watching an episode of Hawaii Five-o, the frustration arises when at the end a sign on the screen says “Episode Continues on “MacGyver” which is not accessible to viewers of the syndicated show. Suggestion: Have Hawaii Five-o pick up the continuation of the show from MacGyver (or as in this case Magnum PI as well) as part and parcel… Read more »

When I read this morning that MacGyver was moved to the midseason, I was horrified by CBS. Of course, CBS makes a big or huge mistake but that does not matter to that stupid broadcaster the way it looks. It does not matter what the fans think what I think is an absolute shame. MacGyver is in the Friday at 8.00 and Magnum is on another day there are still 6 more days in a week if CBS can count. I love the series MacGyver and I am totally disappointed with the decision of CBS. The guys from CBS should… Read more »

I’d love to see a Hawaii five- 0 /Macgeyvor/ Magnum cross over! That’d be so awesome!!!

We watch Hawaii five-0 and MacGyver regularly. Please leave them as they are!! and on next season!

A cross over would show how useless the Magnum PI so call actor is. They should have canned it as a dreadful remake. Only one of the three worth going on with is MacGyver as still entertaining.

I love all 3 shows!!! A crossover would be great!! Keeping my fingers crossed for Hawaii Five-O and MacGuyver to be renewed for 2019-2020 season.

Hoping very much for a new season of MacGuyver. Love that show! Don’t watch the other two, but would watch a crossover with Mac Guyver involved!