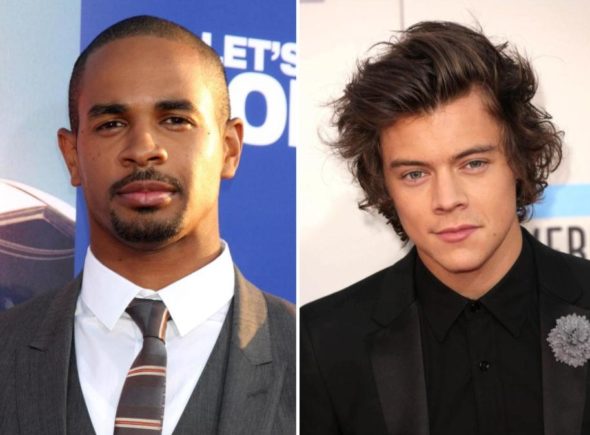 There’s only one direction and broadcast TV is always aiming for it. To that end, CBS has ordered a new, still untitled comedy multi-camera comedy series from Damon Wayans, Jr. Although it is not at all based in reality, the series was inspired by the period of time when executive producers Ben Winston and One Direction’s Harry Styles lived together. 5/16/2018 update: The title for this new TV show is Happy Together.

The new CBS sitcom centers on a suburban couple whose lives get a needed shake-up when a pop star moves in. So far, the cast includes Wayans, Amber Stevens West, Felix Mallard, Stephnie Weir, and Chris Parnell. Learn more from the CBS announcement excerpt.

CBS Television Network has confirmed the following comedy projects have been ordered to Series for the 2018-19 season.

Also on the roster for 2018-19 is a yet-to-be-titled multi-camera project from comedy royalty Damon Wayans, Jr.

Featuring Damon Wayans, Jr., Amber Stevens West, Felix Mallard, Stephnie Weir, and Chris Parnell, the yet-to-be-named comedy is about a 30-something couple who are tired of their mundane life and start to reconnect with their younger, cooler selves when a young pop star who is drawn to their super-normal suburban life, moves in.

According to CBS Television Studios, “The series is inspired by a time when Executive Producers Ben Winston and Harry Styles lived together. However, that’s where the reality ends. The show is not based on real life experiences or characters.”

These orders are in addition to the previously announced series order for Murphy Brown and the drama FBI.

What do you think? Since the Welcome to the Neighborhood title is already taken, what would you name Damon Wayans, Jr.’s new TV series? Let us know below.