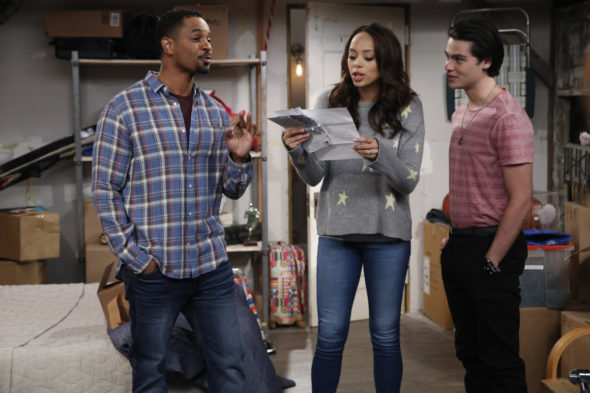 TV show description:
From creator Tim McAuliffe, the Happy Together TV show is a sitcom centering on a happily married couple in their 30s. Just as they’re starting to get a little staid, a young pop star moves in with them and helps them to connect with the younger, cooler people they used to be.

Restaurant and bar designer Claire (West) is married to Jake (Wayans) an accountant. The two have settled pretty well into their suburban home and lives — maybe too well. These days, most of their evenings together unfold on the couch, in front of the television.

When a high-profile break up drives Jake’s client, superstar Copper James (Mallard) to hide from the paparazzi in their home, everything changes. At first they try to keep up with the exuberant young musician’s lifestyle, but effortless cool takes a lot of work and rolls out at an awfully fast pace.

Cooper, however, finds that he enjoys Jake and Claire’s chill way of living and decides to stay. Now the fun has just begun.

Series Finale:
Episode #13, “Backstage (P) asses”
Jake and Claire decide to leave the comfort of their cozy bed for a wild night out, as Cooper performs an intimate concert to debut new music.
First aired: January 14, 2019

What do you think? Do you like the Happy Together TV series? Should this CBS TV show have been cancelled or renewed for season two?

I absolutely loved this show, it was my favorite show to watch. I was so angry you guys cancelled it.

It should not have been canceled…..Refreshing show compared to everything that is cop, lawyer, or hospital related!

Seriously??? What is wrong with CBS’ programming execs? This is a refreshing sitcom with hilarious actors. Please reconsider and bring it back. Hoping that another, more progressive network will pick it up. Shame on you CBS.

Great comedy writing and acting, it’s a mistake to cancel!

Love the show Happy Together. It’s the only comedy show my husband likes to watch. Damon Wayans is hilarious. Please bring back the show.

OMG! Yes! I love it! It is fresh and fun and funny! Claire’s parent! Yes! Lawd! I like these two as actors! But they are heeeelarious together! Claire and Jake!!! Love! Love! The play well off each other. Love them. And Cooper! Just adorable! His facial expressions when Jake is trying to be funny…OMG! Too much fun! Please release more episodes. I have rewatched the others at least 5 times each if not more! Lol! I travel a lot! Thank you for this!

I love this show they would be stupid to cancel it. I think it’s hilarious!!!

I LOVE that show!!! Great actors with a wonderful chemistry. Great scripts with equally great delivery. I was bent over doubled laughing every week. Please bring it back.
We need more programs like this one that bring joy and laughter.

I hope this show will be renewed. I enjoy it.

PULLESE DO NOT CANCEL Happy Together!! great stories and funny characters !!
Takes ya back to real funny sit-com days. love it