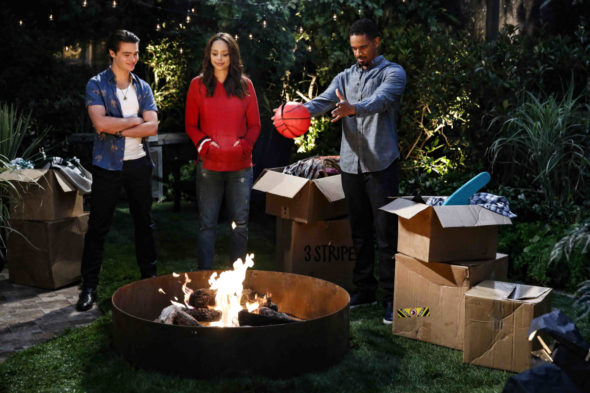 How happy is the Tiffany Network with its new living situation comedy? Is the Happy Together TV show cancelled or renewed for a second season on CBS? The television vulture is watching all the latest TV cancellation and renewal news, so this page is the place to track the status of Happy Together, season two. Bookmark it, or subscribe for the latest updates. Remember, the television vulture is watching your shows. Are you?

A CBS comedy, Happy Together stars Damon Wayans, Jr., Amber Stevens West, Felix Mallard, Stephnie Weir, Victor Williams, and Chris Parnell. The comedy centers on Jake (Wayans) and Claire (West) a happily married couple in their 30s. Just as they’re starting to get a little staid, Jake’s client, pop superstar Cooper James (Mallard), moves in with them and helps them to connect with the younger, cooler people they used to be.

The first season of Happy Together averaged a 0.84 rating in the 18-49 demographic and 4.63 million viewers. Find out how Happy Together stacks up against the other CBS TV shows.

Will CBS cancel or renew Happy Together for season two? This sitcom hasn’t caught on and the network didn’t give it a full season order. I don’t see it getting a second season. I’ll update this page with breaking developments. Subscribe for free Happy Together cancellation or renewal alerts.

5/10/2019 Status Update: Happy Together has been cancelled by CBS — no season two. Details here.

What do you think? Do you like the Happy Together TV series on CBS? Should it have been cancelled or renewed for a second season?

Yes it should be renewed! Hilarious. All of them, every time you get funny sitcom they move it try something else and lose the show you liked, it was perfect on Monday with the Neigborhood: should get a longer run for all to see:

I really hope they renew Happy Together!

I love HAPPY TOGETHER, please renew it. It cracks me up, everyone in that show is a home run

I really enjoyed watching Happy Together always made me laugh , I hope it gets renewed

I love the show. It gave me belly laughs multiple times. They all are funnny! Including the mom and dad. I love the couple very much their chemistry is great! It refreshing to have a clean and funny comedy. Please renew it! I’m sick of reality shows causing me to pay for Netflix so I can enjoy a good comedy. Come on please renew this fresh and funny comedy! Thanks.

I love this show! Every single episode has me literally laughing out loud. The humour is better than most other sitcoms. Please make at least 5 more seasons!!!!! I’m nowhere near done enjoying this show!!

We love the show… well the premise is horrible… but the cast is great!

I think happy together should be renewed for a second season!

Please keep Happy Together on, our whole family Loves this show, Thanks and God Bless

It’s a fun show with great talent. I look forward to it and will be greatly disappointed if it’s cancelled.