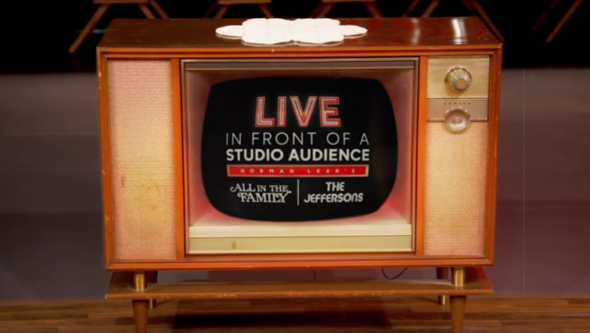 Did you watch ABC’s Live in Front of a Studio Audience? According to Deadline, the network is planning on expanding the TV special into an event series.

The special, which debuted in May, featured live recreations of All in the Family and The Jeffersons with a celebrity cast that included Wanda Sykes, Anthony Anderson, Ike Barinholtz, Ellie Kemper, Jovan Adepo and Woody Harrelson.

ABC executive Karey Burke recently revealed the network is interested in making Live in Front of a Studio Audience an event series since the first one performed so well in the ratings:

It is something that we looked at as a franchise if it worked, and we didn’t know if it would work. We didn’t know if people would still care and it was nice they did. With something like that we would look to return it, not on a weekly basis, I think these things are tentpoles around which we can build sustaining weekly scripted programming, to use as a big circulation play.”

What do you think? Did you enjoy Live in Front of a Studio Audience? Which shows would you like to see recreated?

I’d like to see sanford and son I’m only 37 but i love watching the re runs. I actually watch em every saturday night

I cried seeing the sets , and the great acting and that the actors were people we love and know . i was at awe with all of it . they all made me laugh . it brought back old fealings . i havent seen a good show in decades that was reinvented this good . i cant wait for Maude and good times and many many many many many and many more . and maybe lavern and sherly and happy days and have the time of there lives acting on them . actors and actresses would do anything to… Read more »

I loved the live audience. I think they should have they Brady Bunch next

Great idea for a couple of times a year…. like how CBS brings back I Love Lucy special in color

I hate live programming will never watch it

I have absolutely no interest whatsoever in watching live recreations of any old sitcom!

I for one, loved it. Brought back so many memories of my childhood when I originally watched these shows. I’d love to see them do Norman Lear’s other sitcoms, Maude, Sanford and Son, Good Times, maybe even Chico and The Man

Did not really care for it, especially some of the casting. I grew up with the originals and these seemed like a cheap knock off

I had absolutely no interest in this at all.