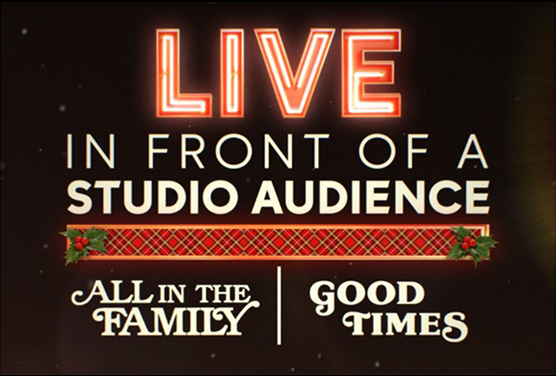 Following the success of ABC’s first Live in Front of a Studio Audience special, the network has announced that another installment will be performed and broadcast on Wednesday, December 18th. Episodes of Norman Lear’s All in the Family and Good Times will be recreated this time around. Casting hasn’t been announced but one might guess that the core cast of the first All in the Family recreation — Woody Harrelson, Marisa Tomei, Ike Barinholtz, and Ellie Kemper — will return in the same roles. ABC also hasn’t revealed which episodes will be performed but it seems likely that they will have a holiday theme.

EMMY(R) AWARD-WINNING ‘LIVE IN FRONT OF A STUDIO AUDIENCE’ RETURNS WEDNESDAY, DEC. 18, RECREATING CLASSIC EPISODES OF ‘ALL IN THE FAMILY’ AND ‘GOOD TIMES’

“Live in Front of a Studio Audience,” the live broadcast television event that captivated audiences with its all-star cast recreating episodes of “All in the Family” and “The Jeffersons” last spring, is set to return to ABC on Wednesday, Dec. 18, with newly recreated, live installments of Norman Lear and Bud Yorkin’s Emmy(R) Award-winning series “All in the Family” and groundbreaking sitcom “Good Times,” created by Mike Evans, Eric Monte and developed by Lear. The holiday-inspired live event produced by Sony Pictures Television, will reunite executive producers Norman Lear, Jimmy Kimmel, Brent Miller, Will Ferrell and Justin Theroux. Kerry Washington, who portrayed Helen Willis of “The Jeffersons” in the original special in the spring, will join as an executive producer.

“The holiday season is the perfect time for families to come together and enjoy another ‘Live in Front of a Studio Audience’ special on ABC,” said Karey Burke, president, ABC Entertainment. “Only Jimmy and Norman can top what they accomplished the first time. From the superstar talent to the unforgettable music and the richly deserved Emmy win, their collective vision has introduced a whole new generation of people to these groundbreaking and timeless stories – and now with ‘Good Times’ as part of the lineup, this will surely be another can’t-miss television event.”

“Being a part of Norman Lear’s world was a career highlight; and working with great actors on these great shows was so much fun, we couldn’t resist tackling a holiday episode of ‘All in the Family’ and one of my favorites, ‘Good Times,'” said Kimmel.

Added Lear, “I don’t know which is greater – bringing back ‘Good Times’ or co-hosting with Jimmy Kimmel?”

“We are so thrilled to be working with this brilliant team again to bring another groundbreaking special featuring Norman’s timeless and prolific works. The themes are as relevant today as when they were first presented,” said Jeff Frost, president of Sony Pictures Television.

About ABC Entertainment
ABC Entertainment airs compelling programming across all day parts, including “Grey’s Anatomy,” the longest-running medical drama in prime-time television; riveting dramas “The Good Doctor,” “How to Get Away with Murder,” “A Million Little Things” and “Station 19”; the Emmy(R) Award-winning “Modern Family” and trailblazing comedy favorites “American Housewife,” “black-ish,” “Bless This Mess,” “The Conners,” “The Goldbergs,” and “Schooled”; the popular “Summer Fun & Games” programming block, including “Card Sharks,” “Celebrity Family Feud,” “Holey Moley” and “Press Your Luck”; star-making sensation “American Idol”; reality phenomenon “Shark Tank”; “The Bachelor” franchise; long-running hits “Dancing with the Stars” and “America’s Funniest Home Videos”; “General Hospital,” which has aired for more than 55 years on the network; and late-night talk show “Jimmy Kimmel Live!”; as well as the critically acclaimed hit special “Live in Front of a Studio Audience: Norman Lear’s ‘All in the Family’ and ‘The Jeffersons.'” The network also boasts some of television’s most prestigious awards shows, including “The Oscars(R),” “The CMA Awards” and the “American Music Awards.” ABC programming can also be viewed on ABC.com, the ABC app and Hulu.

What do you think? Do you plan on watching this holiday installment of Live in Front of a Studio Audience on ABC? Do you think that All in the Family and Good Times are the best choices or, would you have chosen other Lear shows?