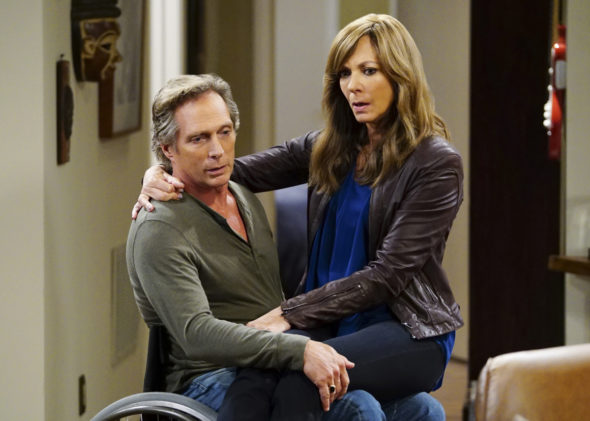 Are Christy and Bonnie Plunkett still hanging in there? Is the Mom TV show cancelled or renewed for a sixth season on CBS? The television vulture is watching all the latest TV cancellation and renewal news, so this page is the place to track the status of Mom, season six. Bookmark it, or subscribe for the latest updates. Remember, the television vulture is watching your shows. Are you?

A sitcom airing on the CBS television network, Mom stars Anna Faris, Allison Janney, Jaime Pressly, Matt Jones, Sadie Calvano, Blake Garrett Rosenthal, Mimi Kennedy, Beth Hall, and William Fichtner. The series centers on Christy (Faris), a single mom in recovery who has moved back in with her own single mother, Bonnie (Janney), who’s also in recovery. Bonnie’s attempts to make up for her failings can try Christy’s patience. After all, she’s working on her relationships with her own kids and their father and working toward a new career. Meanwhile, Bonnie is learning how to forge healthy relationships and still wonders what she’ll be when she grows up. Together, and with the help of AA, Christy and Bonnie spot one another along the road to recovery.

The fifth season of Mom is averaging a 1.46 rating in the 18-49 demographic and 8.76 million viewers. Compared to season four, that’s up by 2% in the demo and up by 16% in viewership. Find out how Mom stacks up against the other CBS TV shows.

Although this comedy’s ratings have slipped over the years, historically, Mom has done pretty well in the demo, which — Big Bang Theory aside — isn’t the Tiffany Network’s strong suit. Flying a bit blind, I expect it will score a renewal. Still, comedies often start to show their age around now, and this program has a good sized syndication package, so another season is not guaranteed. I’ll keep an eye on the Nielsens and update this page with breaking developments. Subscribe for free updates on any Mom cancellation or renewal news.


What do you think? Are you glad that CBS renewed its Mom TV show for season six? How many more seasons do you think this TV series has in it?

Please keep Mom on, other networks Heads up

We love watching MOM, it’s hilarious, and if Christy calls every so often, it’s still doing great, absolutely love the shows with TAMMY and Chef Rudy, they are too funny together. Keep this show going, and going it’s great.

I love this show. So glad CBS renewed it. My wife and I just started watching it on paramount and are trying to catch up to season6. We didn’t know about it and now we do, we LOVE IT! Crazy it came out that long ago and we just tuned in. Thank you CBS! And to the actor’s actresses and writer’s of the show you all rock. Keep up the good work you all!

This show is my favorite behind BBT and I’m ecstatic it’s returning for a 6th season.I pray it last as long as most of Chuck Lorre’s productions.I wanna see Christy grow old is how much I love mom.This show is so relatable to most family’s.I have many alcoholics and recovering drug users in my family.On Christmas Eve this year my 22 year old nephew was found dead from a heroin overdose.Both my parents are alcoholics and this show helps you see your own life and gives hope for recovery and laughter to deal with the now.Thank you for this show… Read more »

So happy to hear “Mom” has been renewed! So refreshing to relate to such a real life issue and laugh a lot because there is so much hope in the pain! We are in this together!! This show unites a lot of people in love and compassion instead of separating us !Thank you !!! I love “Raymond” as well, we can all laugh and relate and feel okay!! Looking forward to this Fall!