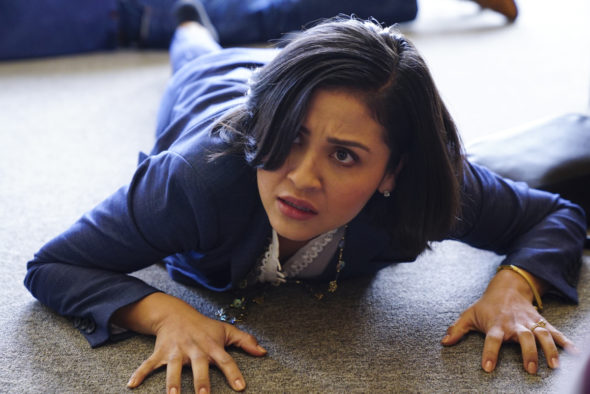 Is the jig up? Has the Pink Collar Crimes TV show been cancelled or renewed for a second season on CBS? The television vulture is watching all the latest TV cancellation and renewal news, so this page is the place to track the status of Pink Collar Crimes, season two. Bookmark it, or subscribe for the latest updates. Remember, the television vulture is watching your shows. Are you?

A CBS true crime series, Pink Collar Crimes is hosted by author and former prosecutor Marcia Clark. The docu-series explores a growing crime demographic — women. As PTA mothers, country-club chairs, and more, these women do not fit the profile of the usual suspects, but they’ve done the crime and the ensuing time.

Will CBS cancel or renew Pink Collar Crimes for season two? The show’s ratings are quite low but the series is presumably cheap to produce. This one could easily go either way. I’ll keep an eye on the Nielsens and update this page with breaking developments. Subscribe for free Pink Collar Crimes cancellation or renewal alerts.

What do you think? Do you think that the Pink Collar Crimes TV show should have been renewed for season two?