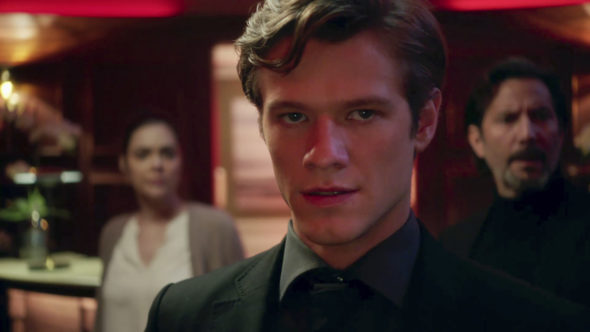 Are Mac and the team still getting the job done? Has the MacGyver TV show been cancelled or renewed for a sixth season on CBS? The television vulture is watching all the latest cancellation and renewal news, so this page is the place to track the status of MacGyver, season six. Bookmark it, or subscribe for the latest updates. Remember, the television vulture is watching your shows. Are you?

Airing on the CBS television network, MacGyver stars Lucas Till, Tristin Mays, Justin Hires, Meredith Eaton, Levy Tran, and Henry Ian Cusick. A reimagining of the 1985 TV series, this show centers on Angus “Mac” MacGyver (Till), a 20-something adventurer. Mac is an operative in a secret organization within the US government called the Phoenix Foundation. There, he uses his vast scientific knowledge and an extraordinary talent for unconventional problem-solving to save lives. In his high-risk missions, Mac is aided by hacker Riley Davis (Mays); Mac’s best friend, prosthetics expert Wilt Bozer (Hires); Director of Operations Matty Weber (Eaton); the team’s protector, Desi Nguyen (Tran); and Russ Taylor (Cusick), a quick-witted former military operative and manipulator. Under the aegis of the Phoenix Foundation, MacGyver takes on the responsibility of saving the world, armed to the teeth with resourcefulness and little more than bubble gum and a paper clip.

The fifth season of MacGyver averaged a 0.51 rating in the 18-49 demographic and 4.74 million viewers. Compared to season four, that’s down by 24% in the demo and down by 22% in viewership. Find out how MacGyver stacks up against other CBS TV shows.

Will CBS cancel or renew MacGyver for season six? While this show is typically a middle-of-the-road performer for CBS, I have no doubt that it will be renewed. I’ll update this page with breaking developments. Subscribe for free alerts on MacGyver cancellation or renewal news.

4/8/21 update: MacGyver has been cancelled by CBS.

What do you think? Were you hoping that the MacGyver TV show would be renewed for a sixth season? Are you sorry that CBS cancelled this TV series, instead?

wait? i am sorry but i think that macgyver is a really good show like it is my favorite! I can’t for season six because ril and mac are really cute.

Awesome We want a season 6

Macguyver is the dumbest and worst tv show on ion tv. To stupid to watch

I think the show started going down hill shortly after Jack Dalton left. He was the necessary comic relief
Too much relationship crap. NCIS, SVU, etc
last bcuz the job comes first & personal life is kept to a minimum

Bring back Mcgyver. I just found this show. It’s great.

It like the old macgver&a little different but very good to watch.

I loved it please bring it back

I love MacGyver series to continue. If it does nor I will not vote ever again. I know every vote matters, but if you want to stay in office then you will not cancel the series. And that’s my final answer!!!!!

Bring back MacGyver it’s better than the original

More stupid nonsense! This show had at least two more good seasons left in it! Network idiots strike again! I guess mindless reality TV is where it’s at for the naive population.

we need to see ri and mac together